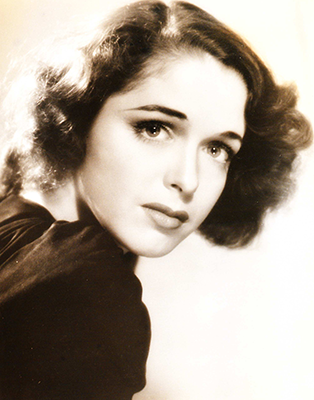 Julie Stevens, née Harriet Foote (1916-1984), was an actress of stage, screen, television and radio. She is best known for her leading role as Helen Trent on the radio soap opera "The Romance of Helen Trent," about the trials and travails of romance after the age of 35.

Stevens played the role of Helen Trent for over 15 years, from 1944 to 1960. Her career also included appearances as newspaper reporter Lorelei Kilbourne on the CBS television series "Big Town" from 1951-1952.

This gallery presents samples from The Papers of Julie Stevens at the Library of American Broadcasting.

The collection spans the years 1940 to 1980 and contains newspaper and magazine clippings, correspondence, contracts, fan mail, photographs, theatre programs and various artifacts. It was donated to the Library in 1999. 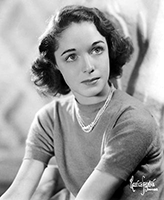 This publicity photo of Julie Stevens, c. 1930's, was taken while she was still a young stage actress.

Stevens spent her childhood in Connecticut and St. Louis, Missouri. She attended Christian College for one year, an all-female institution in Columbia, Missouri, before making her stage debut with the St. Louis Little Theatre.

After a stint on the west coast participating in productions of Shakespearean works at the San Diego Globe Theatre, and another season with the Little Theatre in St. Louis, a self-proclaimed "stage-struck" Stevens moved to New York to pursue her dream of stardom on Broadway. 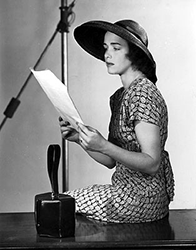 Another publicity photo from early in her career depicting Julie Stevens' studious side.

Stevens was committed to establishing an acting career in New York though, at the beginning, parts were not easy to find. She took a job as a typist for writer-director Max Marcin, which led to an understudy role in his 1938 melodrama "Censored." The play closed after a short run, but Stevens was soon offered an opportunity to return to California and join the Pasadena Playhouse. She was given the ingenue role in that group's production of "Yes, My Darling Daughter."

Stevens' impressive performance in that play led to an offer of a contract with Warner Brothers movie studios. Stevens accepted, and went on to appear in a number of films for Warner Brothers. However, the stage still remained her primary priority. 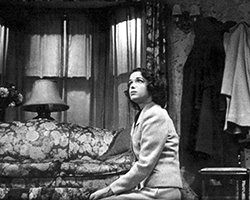 This photograph shows Julie Stevens as she appeared on the New York stage during a performance of the hit play, "The Male Animal."

Stevens replaced actress Gene Tierney in the part and would later go on tour with this production. Other stage roles followed, including parts in "Snookie," and "Brooklyn, USA." 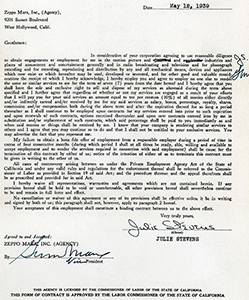 This 1939 contract that Julie Stevens signed with Warner Brothers established her as a "contract player" for the studio.

Stevens was represented at that time by Zeppo Marx, a former member of the Marx Brothers, who was running his own talent agency, along with his brother Gummo.

Julie Stevens appeared and toured in various plays in the early part of her career. This clipping celebrates her role in "The Male Animal."

In 1942, Stevens was offered the lead role in the CBS radio drama "Kitty Foyle," based on the 1940 movie of the same title that starred Ginger Rogers. Though Stevens continued to act on stage and screen, it was the popularity of radio drama that would ultimately bring her her greatest fame.

Stevens would go on to play leading roles in several other radio programs, including "Abbie's Irish Rose" and "Road of Life," before being cast in her best-known part, that of Helen in "The Romance of Helen Trent." 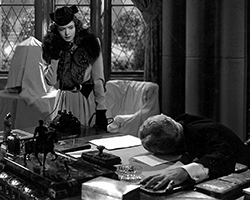 A publicity still for Julie Stevens, in the role of Eve Blades, for the 1940 mystery movie "Honeymoon Deferred." 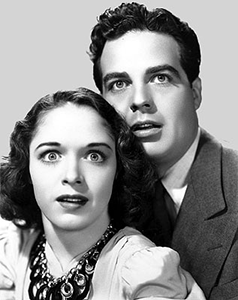 Some of Stevens' other film credits include "Tear Gas Squad" and "Private Detective," as well as uncredited roles in movies like "Murder in the Air" and "Castle on the Hudson"--all in 1940.

In 1944, Julie Stevens took over the leading role in the popular and long-running daily radio soap opera, "The Romance of Helen Trent." This newspaper clipping celebrates Helen Trent's 20 years on the air.

Each day's broadcast began with the following preamble:

And now "The Romance of Helen Trent": the real-life drama of Helen Trent, who, when life mocks her, breaks her hopes, dashes her against the rocks of despair, fights back bravely, successfully, to prove what so many women long to prove--that because a woman is thirty-five or more, romance in life need not be over, that romance can begin at thirty-five. 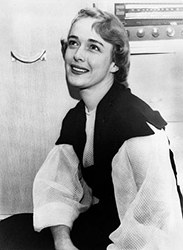 This photograph shows Julie Stevens during her Helen Trent heyday.

Stevens was not the first actress to play the role of Helen, but did play it the longest, and was performing the role up to the show's final broadcast in 1960. 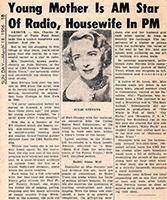 This 1956 newspaper profile celebrates Julie Stevens' balance of life and work, mentioning her marriage to Charles Underhill, her role as mother to a young daughter, and her daily commute to the CBS radio studios to broadcast each installment of "The Romance of Helen Trent."

Stevens, her co-stars, and her family were often written about in the top fan magazines of that era. The readers of "Radio-TV Mirror" twice voted Stevens as most outstanding daytime radio actress, in the years 1957-1958, and 1958-1959. 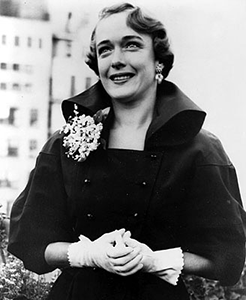 A mid-career portrait of Julie Stevens.

Over the course of her career, Stevens received a wide variety of fan letters, often addressed to her radio characters (Kitty or Helen) rather than to her.

Listeners often took the behavior of their favorite characters very seriously, and did not mince words in giving them personal advice.

One of the many heartfelt letters that Julie Stevens received over the course of her career in radio.

"Dear Friend, I have listened to your sweet voice for years, and now I am asking for your picture. I am a shut-in, and have only the radio for pleasure. 'The Romance of Helen Trent' is the highlight of my day. I know you must be as lovely as your voice--so please send me a picture." 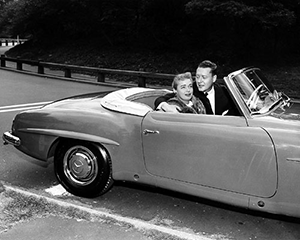 This publicity photo features Julie Stevens as Helen Trent, along with her leading male co-star.

Although "The Romance of Helen Trent" was a radio show, its stars were often called upon to pose as their characters for publicity shots, which would then be sent to fan magazines or used for promotion. This meant that when actors and actresses were hired for roles in radio dramas not only did their voices have to fit the part but, to a certain extent, their looks had to fit as well. 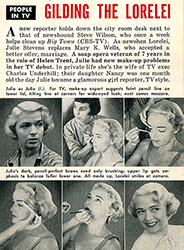 Though it is often assumed that women's roles in early television were limited to those of wife and/or mother, there were in fact numerous examples of women working outside the home. Many of these characters (Eve Arden in "Our Miss Brooks," and Ann Sothern in "Private Secretary") were seen in traditionally female-dominated occupations. Others, however, defied stereotypes to show women in other roles. Some examples of this include June Havoc as a lawyer on "Willy," Lynn Bari as the head of a construction firm on "Boss Lady," and Julie Stevens, as a newspaper reporter in "Big Town." 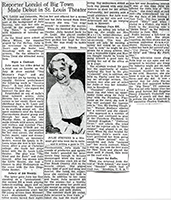 This c. 1952 article outlines Julie Stevens' career trajectory from stage to radio to film to the television screen.

The TV series "Big Town" came to the small screen only after first having proved successful on the radio. This transition from one medium to another was not unusual at that time. "Amos n' Andy," "The Goldbergs," and numerous other radio series were later brought to TV with great success. Often the radio and TV versions existed concurrently--sometimes with the same performers featured in each. 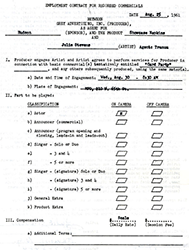 Julie Stevens also did not shy away from commercial work, as this 1961 contract shows.

Back in 1942, she signed to appear on the "Canadians Breweries Program." Many years later, Stevens would appear on the TV game show I've Got a Secret where the panelist failed to figure out that she was the voice of radio's Helen Trent. 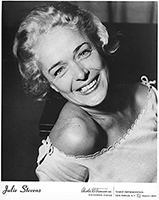 This is one of Julie Stevens' latter-day theatrical "head shots."

After the conclusion of "The Romance of Helen Trent" in 1960, Stevens devoted her time to her family, and to working in local theatre in the Cape Cod, Massachusetts area. She also briefly hosted an area radio show which included theatrical reviews, among other topics.