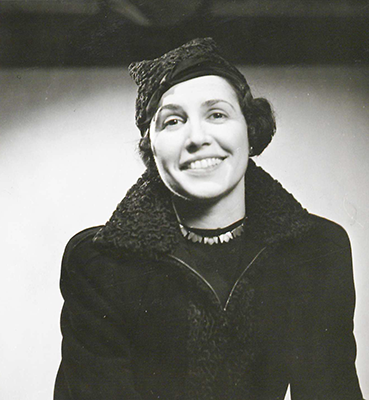 Helen Sioussat (1902-1995) was the Director of Talks and Public Affairs for CBS radio from 1937 to 1958. In that role, she regularly oversaw as many as 300 broadcasts a year addressing such topics as government, labor, education, religion, civil rights, and international affairs.

In 1941, Sioussat created and hosted the TV program "Table Talk," the first roundtable discussion show on television. She also wrote a book about broadcasting, called "Mikes Don't Bite," published in 1943.

This gallery presents samples from The Papers of Helen J. Sioussat at the Library of American Broadcasting.

The collection spans the years 1926 to 1995 and contains correspondence, press releases, transcripts, manuscripts, citations, photographs, financial records, photo albums, and other items. It was donated to the Library in 1995. 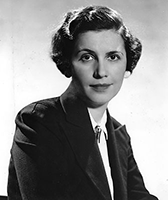 Helen Sioussat was born in Baltimore, Maryland in 1902. She came to radio broadcasting in the 1936, after diverse career experiences in business and government.

Sioussat attended Goucher College in Towson, Maryland. In the early 1920's she spent ten months touring on stage, headlining with partner Raphael Sanchez, as a Spanish Adagio dance team. Ending up in Kansas City, Missouri in 1927, she began a career in business.

Sioussat moved to Washington, DC in 1935, where she became Assistant to the Treasurer of the Planning & Coordinating Committee for the Petroleum Industry, during the last year of the National Recovery Act (NRA).

This "head shot" was taken early in Sioussat's broadcasting career. 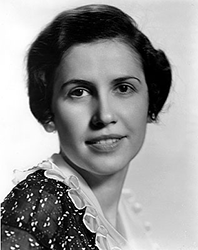 Another portrait of Helen Sioussat taken early in her broadcasting career.

In Washington DC, Sioussat contacted Phillips H. Lord, an actor and producer of many popular radio programs. In 1935 she became a script-writer for his radio program "G-Men," which was the forerunner of the well-known radio show "Gang Busters."

To help facilitate getting official information from the closed files upon which the radio series was based, Sioussat was given an office next to J. Edgar Hoover in the Department of Justice. Her friendship with Hoover lasted for many years, and they kept up a correspondence until his death in 1972. 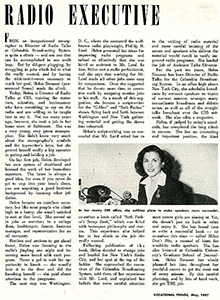 This page from a 1947 profile of Helen Sioussat was featured in "Vocational Trends" and traces the outline of her career trajectory.

In 1936 she was hired by CBS radio as Assistant Director of the Talks and Public Affairs Department, headed by Edward R. Murrow. The following year, when Murrow went overseas to oversee the network's foreign correspondents, Sioussat took over his job as Director.

As Director, Sioussat was responsible for arranging the network's public affairs programming. She scheduled broadcasts--often more than 300 per year--by an array of speakers on various topics, and also took part in formulating policy for all CBS public service programs.

This is the cover of Helen Sioussat's book "Mikes Don't Bite," a light-hearted account of her career in radio broadcasting. It was published in 1943.

Along with various tales of live broadcast mishaps, Sioussat's book also gives tips on how to become an effective communicator, both over the air and in person. 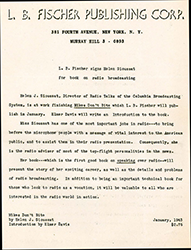 When the book was published in 1943, Bloomingdale's department store in New York featured a full window display with photos of Sioussat. 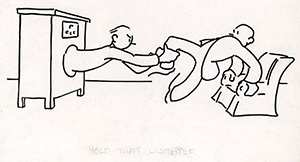 One of the amusing, simple, original illustrations used throughout Helen Sioussat's book.

Many of the illustrations feature a dark-haired, smartly suited female character, who bears more than a bit of a resemblance to Sioussat. 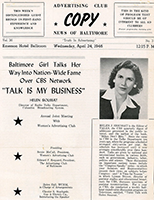 As a woman with such an important and influential job, Helen Sioussat was often asked to speak, on a variety of topics, to organizations both large and small. 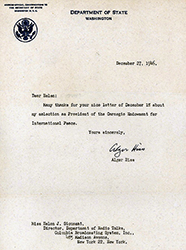 This 1946 letter from Alger Hiss is one of many letters from prominent persons collected in the Papers of Helen Sioussat at the Library of American Broadcasting.

Over the course of her career Sioussat received mail from the likes of Mae West, Helen Keller, Albert Einstein, and Jonas Salk, among many others. 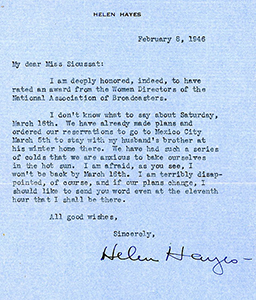 This 1946 letter to Helen Sioussat comes from actress Helen Hayes, known as "the First Lady of the American Theatre." Hayes was a great friend of Sioussat's. 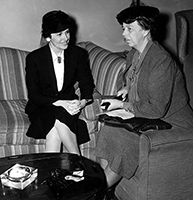 As Director of Talks and Public Affairs for CBS, Sioussat was responsible for over 300 broadcasts a year. Over the course of her career she would produce radio and television programs featuring such prominent personalities as Alfred Hitchcock, Herbert Hoover, Fannie Hurst, H.V. Kaltenborn, John Foster Dulles, and Robert Trout, along with innumerable others. 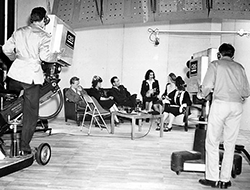 In 1941, long before most Americans had even heard of "television," Helen Sioussat created, produced and hosted the CBS-roundtable discussion program "Table Talk with Helen Sioussat."

Thus, it is very probable that Sioussat was the first female television talk show host in broadcasting history. 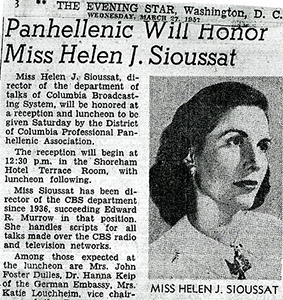 This 1937 news clipping from the Washington, DC "Evening Star" makes note of an honor bestowed upon Helen Sioussat by the District of Columbia Professional Panhellenic Association. 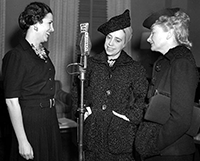 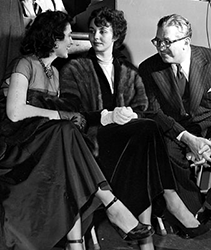 In this photograph Helen Sioussat (left) is pictured with actress Jennifer Jones (center) and her husband, the producer David O. Selznick.

Selznick, the producer of "Gone With the Wind," was married to Jones, an Oscar winner for her role in "The Song of Bernadette," from 1949 until his death in 1965. 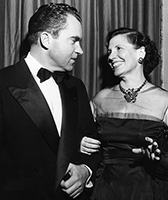 Helen Sioussat is pictured here on the arm of Richard Nixon.

Due to the nature of her work in Public Affairs at CBS, Sioussat usually maintained very friendly relationships with all of the "first families," including the Trumans, the Kennedys, and the Johnsons. She also cultivated relationships with other influential members of government, like J. Edgar Hoover. 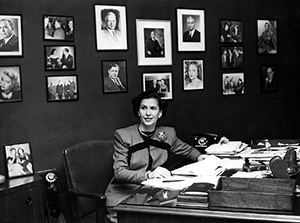 Note the photos of Sioussat's various famous friends hanging on the wall behind her--including one of actress Miriam Hopkins, on the far left. 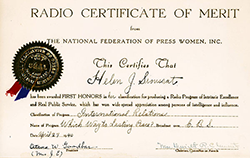 From National Federation of Press Women, 1940

Helen Sioussat received this honor in 1940 from the National Federation of Press Women, Inc. for her program "Which Way to Lasting Peace?"

Other organizations that honored Sioussat included: the American Jewish Tercentenary Committee, the Ladies Auxiliary [of] the Veterans of Foreign Wars, the American Legion, and the US Treasury Department. 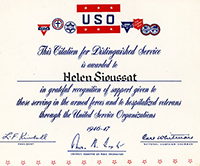 Certificate of Appreciation from USO, 1947

During her career, Helen Sioussat received many accolades. This one is from 1947, and was bestowed on her by the USO. 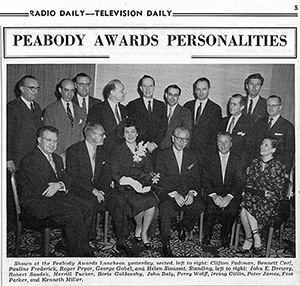 Transcripts of these educational broadcasts were later published in journal form, and supplied by CBS to libraries and to the public. 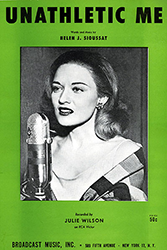 In addition to all of her other talents, Helen Sioussat was also a successful songwriter. She wrote the tune "Unathletic Me," which was later recorded by her friend Julie Wilson, pictured here.

Some of Sioussat's other compositions include "Meet Me at the Waldorf," "My Beloved," and "Beautiful Cat Cay."