All of the materials for Persistent Vision are drawn from 15 individual collections located at Special Collections in Performing Arts (SCPA) at the University of Maryland that together make up the Punk collections at UMD. As the performing arts archive at the University of Maryland, SCPA is made up of a diverse array of collections on the performing arts, broadly defined, one facet of which are our punk collections. Each collection is unique to the person or people that put it together, with each collection providing a distinct slice of the D.C. scene. Read below to find out more and explore a collection. All collections listed below are open to the public, just email us to make an appointment here so that you can experience the material legacy of the scene yourself. 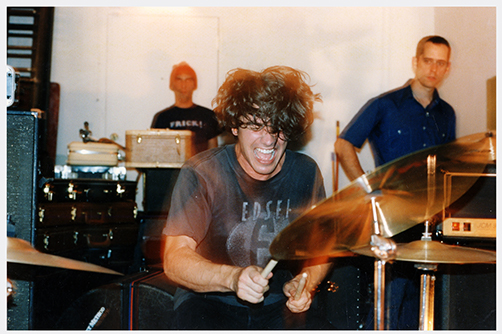 Chris Baronner (b. 1976) is an American concert promoter, talent buyer, booking agent, photographer and musician. The Chris Baronner digital collection on D.C. Punk contains items that span the period of 1982 to 2018; the bulk of the material dates from 1994 to 2000 when Baronner was promoting shows in State College, Pennsylvania and touring the United States with his band, Ethel Meserve. The collection contains fliers for D.C.-related bands, posters used to promote D.C. record label releases and band tours, concert photographs taken by Baronner, and ephemera related to D.C. punk culture. 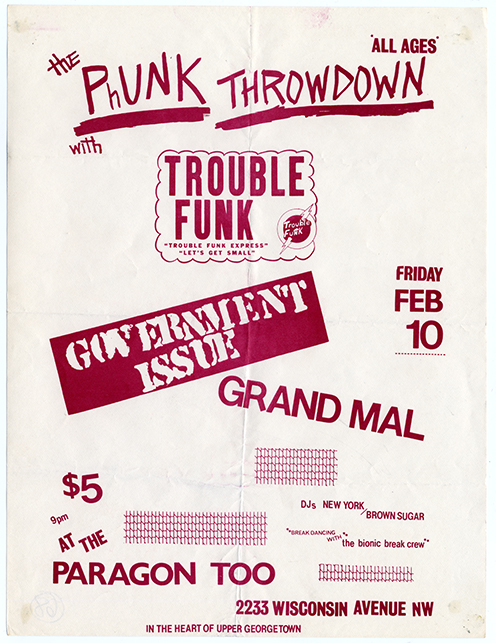 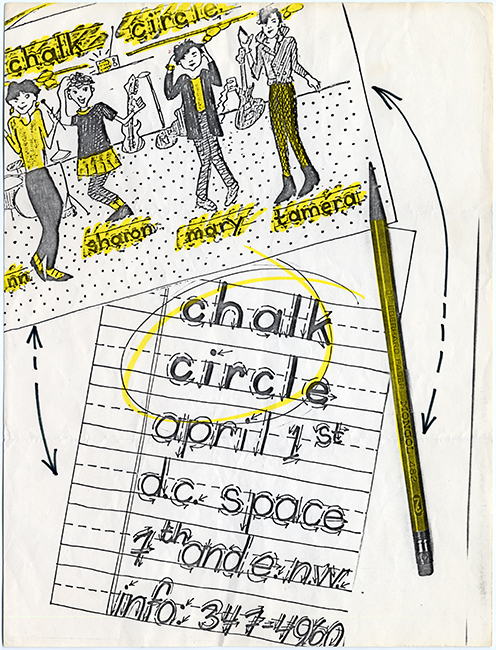 Sharon Cheslow (b. 1961, Los Angeles, CA), an American musician, artist, author, and educator, is a notable figure in Washington, DC punk rock history, particularly in terms of the scene’s rise in prominence internationally. She was both an eyewitness and participant during the bedrock years of DC punk (late 1970s through early 1990s). The Sharon Cheslow Punk Flyers collection contains items that span the period of May 1, 1979 to December 30, 1991; the bulk of the material dates from 1980 to 1990. The collection includes 484 punk flyers (393 originals, 91 photocopies) created and collected during 1979 through 1991. Nearly all of the flyers in the collection are promoting shows in the Washington, DC area and feature punk bands from the DC area. 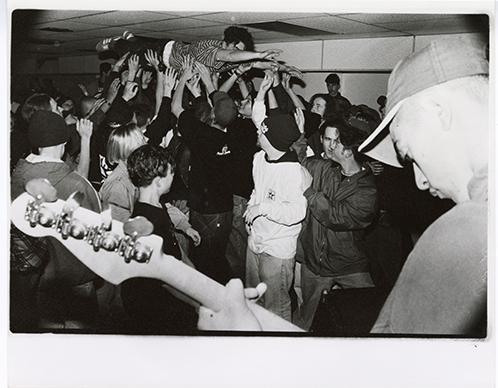 Aaron “AC” Claxton (b. 1977) is a musician and business owner who was active in the Washington, D.C. hardcore punk scene in the early 1990s. The Aaron Claxton collection on D.C. Hardcore contains items that span the years 1992 to 1995; the bulk of the materials date from 1992 to 1993, when Claxton was a member of the hardcore band Gauge. The materials in this collection primarily consist of show fliers and photographs related to shows that Claxton performed at or attended. 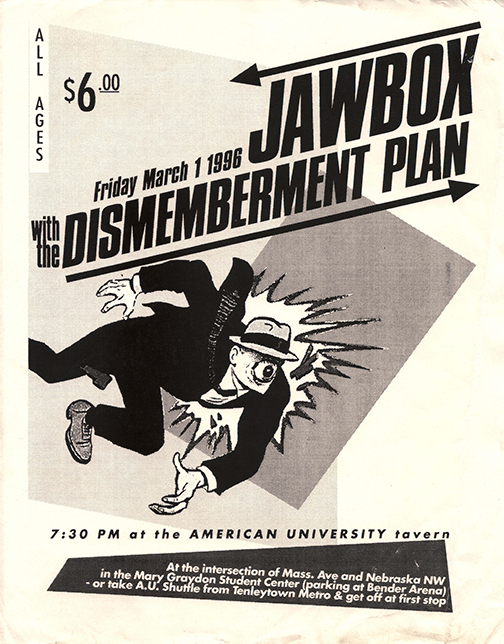 John Davis (b. 1976) is an American musician, fanzine editor, librarian, and archivist. The John Davis collection on punk contains items that span the period from 1980 to 2019; the bulk of the material dates from 1994 to 1999 when Davis was editing the fanzines, Slanted and Held Like Sound. The collection contains concert photographs taken by Davis, fliers advertising punk concerts that Davis collected, ephemera related to D.C. punk culture, and posters mostly related to his career as a musician. 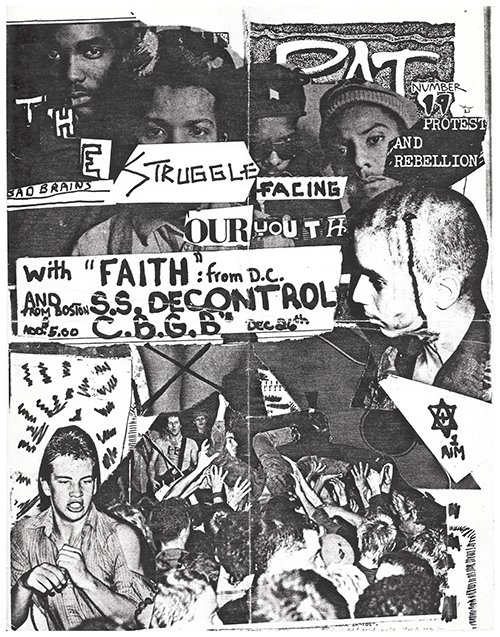 The D.C. punk collection covers the period from 1981-2021; the bulk of the materials date from 1983-1987. The collection includes fliers, posters, recordings, photographs and ephemera related to the punk rock subculture in the Washington, D.C. area, which developed in the late 1970s. 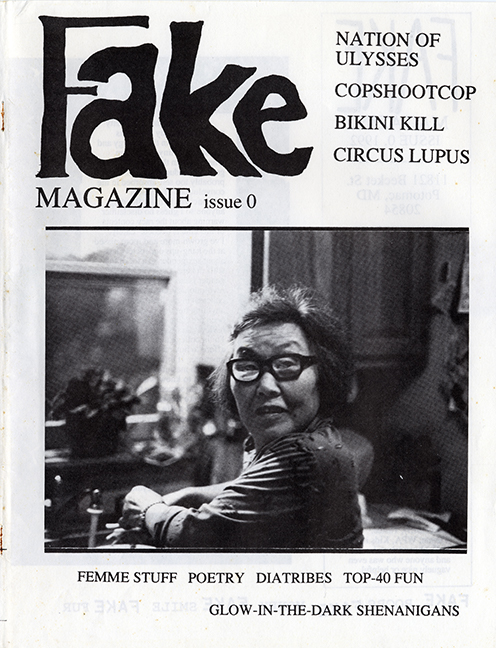 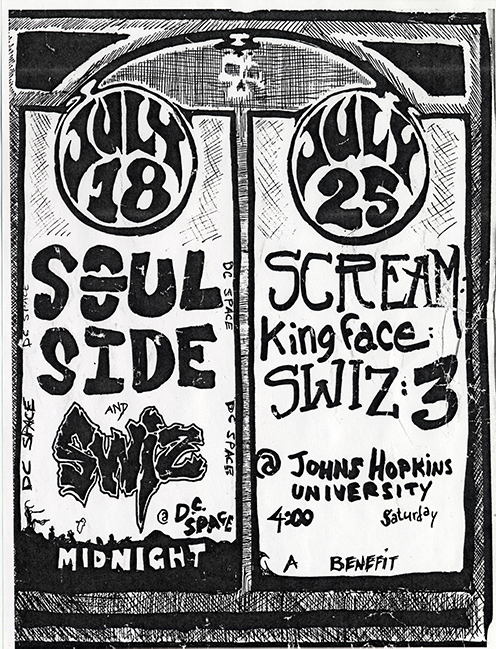 Jason Farrell (b. December 24, 1969) is a musician, graphic designer, and filmmaker who currently lives in Los Angeles, CA., but also spent several decades as a part of the punk music subculture in the Washington, D.C. area. The Jason Farrell collection contains items that span the years 1985 to 2007; the bulk of the materials date from 1987 to 1998 when Farrell was a member of the bands Swiz and, later, Bluetip. The materials in this collection primarily consist of show fliers and posters that Farrell designed for his bands. 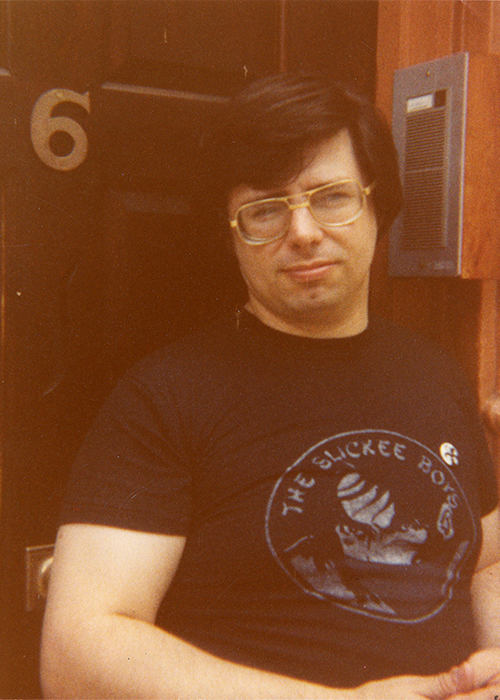 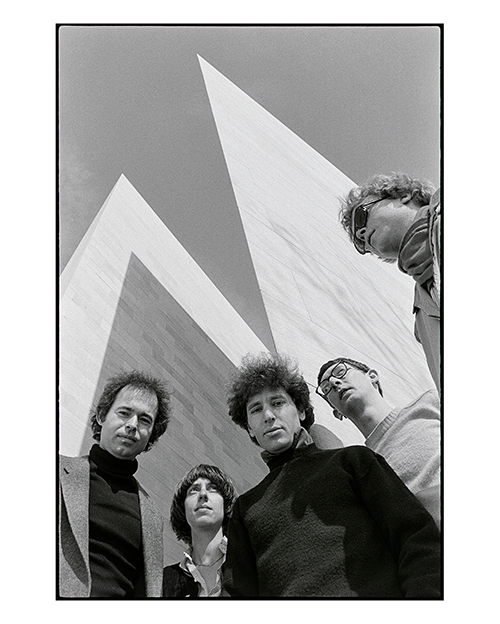 Don Hamerman (b.1954) is a commercial photographer based out of Stamford, Connecticut. Hamerman was a staff photographer for Unicorn Times from 1978-1980, a monthly performing arts periodical from Washington, D.C. Known for his collection "My Found Baseballs," Hamerman’s work has been featured in publications such as Time’s “Lightbox,” NPR’s “Picture Show”, and periodicals such as New York, Elle, Smithsonian Magazine, and The Wall Street Journal. 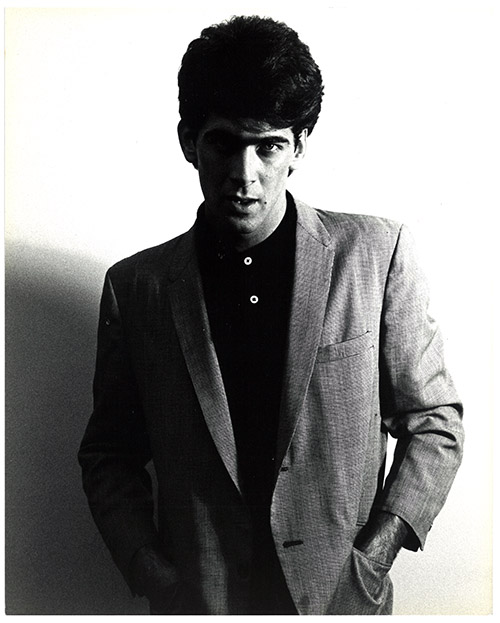 Tommy Keene (b. June 30, 1958, Evanston, Illinois – d. November 22, 2017, Los Angeles, California) was an American musician and songwriter. Raised in Bethesda, Maryland, Keene was immersed in rock music from a young age as a fan and, by his teenage years, as a musician in bands around the Washington, D.C. area. Starting his music career as a member of the bands Blue Steel, the Rage and, most notably, the Razz, Keene eventually embarked on a solo career in the early 1980s that led him to sign with Geffen Records, for which he released two crticially acclaimed albums — 1986's Songs From the Film and 1989's Based on Happy Times. Keene also worked with Matador Records, Alias Records, and numerous other independent labels. The Tommy Keene papers include personal and professional papers, photographs, fliers, ephemera, publications, recordings, and realia. The dates for the materials range from 1966 to 2003, with the bulk of the materials coming from 1975-1993. 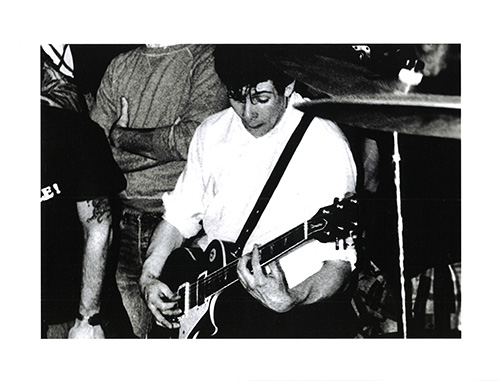 Kevin Salk is an American photographer who was active in the first half of the 1980s and again in the 2020s. The subject of Salk's photography was generally the American hardcore punk subculture in Southern California. The materials in this collection consist of prints of Salk's photographs of the Washington, D.C. hardcore punk band Minor Threat, as well as a signed copy of Salk's 2021 book, Punk: Photos From a Fan's Perspective. The photographs in this collection were created from 1982-1983. 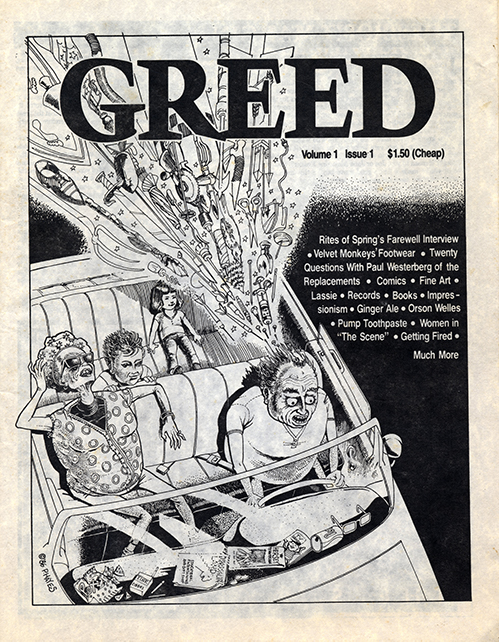 Kurt Sayenga [b. 1961] is a director, writer, producer, artist, and graphic designer who was also the editor and publisher of Greed fanzine from 1985 to 1989. This collection contains materials created by Sayenga related to the production and promotion of Greed. 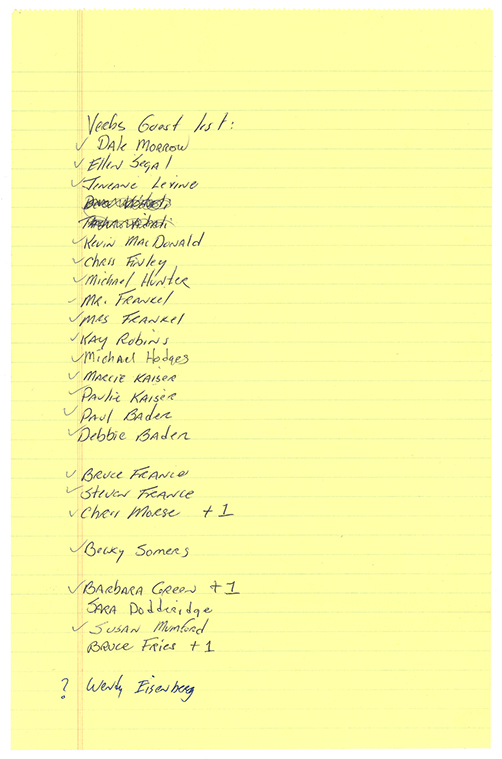 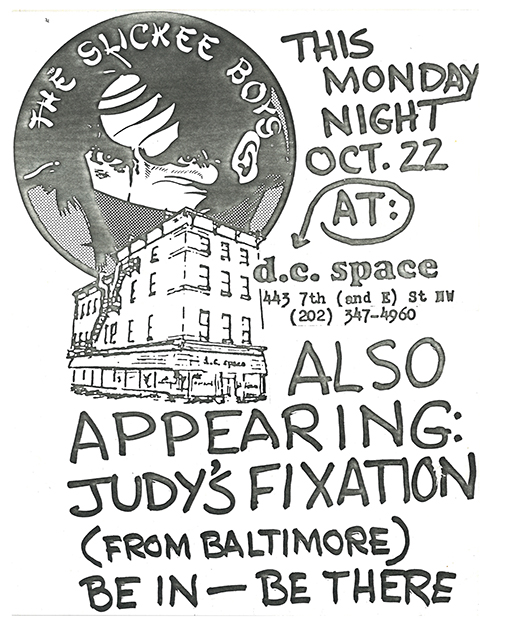 Robbie White is a disc jockey and music enthusiast who served as the fan club president and roadie for the Slickee Boys -- a band that was active from 1976 to 1991 and was one of the founding bands of the Washington, D.C. punk rock and new wave subculture. White collected numerous fliers, posters, and photographs related to the Slickee Boys, some of which are found in this collection. The collection consists of physical objects that White donated, as well as some digitized versions of physical objects from White's collection that were not a part of the gift to Special Collections in Performing Arts.