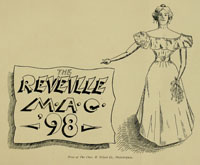 Yahentamitsi dining hall — The Yahentamitsi (pronounced Yah-hen-tuh-meet-c) dining hall will open in fall 2022 and is the first dining hall built on campus in nearly 50 years. The 60,000 square-foot hall, the first campus building to honor Native American heritage, will seat 1,000 people, have gender neutral bathrooms and include an outdoor dining balcony that overlooks the practice fields and Maryland Stadium. The name means “a place to go to eat” in the Algonquian language spoken by the Piscataway Conoy Tribe.

Yearbook — The Maryland Agricultural College cadets first produced a yearbook, known as Reveille, in 1897. In 1935, the name changed to the Terrapin, and then briefly changed to Us from 1971-1972. Today the name remains the Terrapin. Yearbooks from 1897 to the present have been digitized and are available via links on the University Archives' Yearbooks webpage.

YMCA — The Young Men's Christian Association established a chapter at the Maryland Agricultural College during the 1900-1901 academic year. According to the 1910 Reveille yearbook, the organization's purpose was to "deepen the spiritual life of its members and promote social and Christian fellowship among them." The group sponsored religious meetings and other speakers, stocked game rooms and a reading room, and even assisted in locating employment for students who desired it. The YMCA was also responsible for the production of early student handbooks for freshmen.