Baha'i Chair for World Peace — This endowed chair is dedicated to the advancement of knowledge in matters of conflict resolution and the promotion of peace and prosperity throughout the world.

Baltimore Hall — Dormitory constructed in 1921; originally named Silvester Hall. Renamed in honor of Baltimore County, Maryland, in 1954 and renovated around 1970. 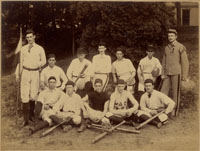 Baseball — The earliest known sport played on campus. The cadets of the Maryland Agricultural College began playing baseball competitively in 1869, and 1998 marked the 100th anniversary of the baseball team's first state championship. The first Terp to play baseball professionally was Simon Nicholls, Class of 1903, who played shortstop for the Detroit Tigers, Philadelphia Athletics, and Cleveland Naps in 1903 and 1906-1910. Charlie Keller, Class of 1937, was the only Terp to play in the All-Star Game and the World Series, until Brandon Lowe made the All-Star roser in 2019.  View a list of all the Terps who have played professional baseball.

Beanies — From the 1910s to the 1960s, freshman students were required to wear beanies everywhere they went on campus, from their first day of school until the freshman-sophomore tug-of-war, held during the spring semester. The beanies were known as "rat caps" for the men and "rabbit caps" for the women.  For more information visit the Terp's page on the Beanies of the Big Ten website.

Bee and Wasp Habitat — On North Campus, near the former Apiary building, which now serves as the education center for the Arboretum, and Maryland Stadium, stands a strangely-shaped habitat designed "to raise public awareness of wild pollinators and to facilitate monitoring of campus bee populations."  This habitat, constructed in 2015 and titled "Dwelling (Paint Branch Creek)," is designed to revitalize our campus bee population and to encourage further research on wild pollinators in other parts of the country.  Its components, including a green roof, are specially constructed to attract native solitary bees and wasps.

Benches — There are several benches on campus dedicated to members of the university community.  A bench near Susquehanna Hall honors the memory of Nancy Moore and Sue Oswald, former members of the Department of English.  Two benches grace Morrill Quad close to Taliaferro Hall, one dedicated to Charles and Ruth Manning, the other in memory of Meghan E. Price.  Dr. Manning was a professor of English and also served a term as the Dean of the College of Arts and Sciences.  Meghan Price was president of the Student Government Association in 1998 when she was tragically killed in an automobile accident.  Additional benches, located in the Garden of Reflection and Remembrance south of Memorial Chapel, honor Marsha Guenzler-Stevens, the director of the Stamp Student Union, and the memory of UMD students, faculty, and staff whose journey at the university was cut short.

Big Ten — On November 19, 2012, the University of Maryland's Board of Regents voted to leave the ACC and join the Big Ten as the 13th member of the conference, effective July 1, 2014. Rutgers University joined the Big Ten the following day, increasing the total number of schools to 14 beginning with the 2014-2015 school year. The conference is split into East and West divisions for football; Maryland competes in the East division along with Indiana, Michigan, Michigan State, Ohio State, Penn State, and Rutgers. By joining the Big Ten, Maryland also became a member of the Big Ten Academic Alliance, a collaborative academic consortium that allows each member institution to take advantage of resources and programs at other BTAA schools.

BikeShare — The mBike bike-sharing program, where Zagster members could borrow a bike for a quick trip across campus, began in 2016 and is scheduled to be replaced in August 2019 with new pedal and pedal-assist bikes and electric scooters.

Black Explosion — The Black Student Union began publishing an independent newspaper entitled the Black Explosion sometime between 1967 and 1970; the actual date is unclear, and the founding date is reported variously on the masthead on the paper itself.  Maryland Media Inc. voted to accept this bi-monthly paper as a full member in September 1972, and the Black Explosion appeared under the MMI umbrella until fall 1985 when the Nyumburu Cultural Center took over sponsorship of the paper.  Publication frequency varied in the paper's early days from monthly to bi-weekly then weekly, returning to a bi-monthly schedule in 1974, which it maintained until the later years of the paper.  Ultimately, in early 2016, the Black Explosion became an online-only publication, available at The Black Explosion website.  Digitized issues of the paper from May 1970 to December 2015/January 2016 are available in the UMD Archives' Student Newspaper Database.

Black Saga Competition — Competition which tests elementary and middle school students' knowledge of African American history.  Originated in 1992 at the University of Maryland with one school and expanded to include teams of students from schools in Prince George's, Montgomery, Howard, Anne Arundel, and Baltimore counties.  Competition now run from the University of Maryland Baltimore County campus.  For more information, visit the Black Saga website.

Black Student Union — Established in May 1968 to represent the interests of African American students in the University of Maryland community.

Book, Oldest — The oldest complete book owned by the University of Maryland Libraries dates from 1482 and is entitled Confessionale anthonini. It is a collection of sermons on Christian ethics and repentance by Saint Antoninus, Archbishop of Florence.

BookLab — Facility opened in September 2018 in Tawes Hall by the Department of English to facilitate the study of all facets of a book. Includes two hand presses for letter-press printing, a wide variety of type, a 3-D printer, tools and hardware for printing and paper-making, and a large collection of books about books.

Bowling — The university had a bowling team in 1985. There is a bowling alley on campus, located in the basement of the Adele Stamp Student Union. 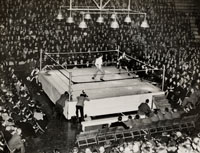 Boxing — First organized at the Maryland Agriculture College in 1911 and became a varsity sport in 1931. The boxing team was Southern Conference champions in 1939.  Competition in boxing ended in fall 1955 due to scheduling conflicts.

Boys Nation — The American Legion's Boys Nation program was housed annually in the summer at the University of Maryland from 1952 to 1967.  Boys Nation brings together two young men from each state to learn about the operation of the federal government through a wide variety of programs and activities.  Former U.S. President Bill Clinton stayed on campus as one of the two Arkansas representatives to the 1963 Boys Nation; during this trip, he had the opportunity to meet President John F. Kennedy, an event that he frequently describes as having a major impact on his life and his own political career.

Broadcasters — Pam Ward (Class of 1984) became the first woman to do play-by-play coverage of college football on national television when she broadcast three games for ESPN during the 2000 season.

Broadway Hit — The musical Damn Yankees is based on the book The Year the Yankees Lost the Pennant by J. Douglas Wallop III (Business and Public Administration, Class of 1942). Damn Yankees opened on Broadway at the 46th Street Theatre on May 5, 1955, and ran for 1,019 performances. The successful show became a movie in 1958, starring Tab Hunter, Gwen Verdon, and Ray Walston. Local theatre groups around the United States often choose to stage this play, that also enjoyed a stage revival on Broadway, headlined by Jerry Lewis, in the 1990s.

Bryant, Paul "Bear" — The legendary coach of the Alabama Crimson Tide actually led the Terps on the gridiron for one season in 1945. In Bryant's first game, the Terps defeated the Guilford College Quakers 60-6 in front of 7,000 fans at Byrd Stadium on September 28, 1945.

Building, Oldest — The oldest building on campus whose facade is largely intact is Morrill Hall, constructed in 1898. Although the Rossborough Inn was originally built between 1802 and 1814, extensive renovations have significantly altered the appearance of the building's exterior.

Building, Smallest — The smallest structure on campus that is identified with a building number is the Security Booth on Stadium Drive at 67 gross square feet.

Byrd Beach — Students greeted the return of springtime warmth to the campus by donning their bathing suits and stretching out along the bleachers in Byrd (now Maryland) Stadium to study, tan, and people-watch.

Byrd Stadium — Constructed in 1950 and named for Harry Clifton Byrd, Class of 1908 and president of the University of Maryland, 1935-1954.  Renamed Maryland Stadium in December 2015.  Full capacity is 48,055 people.  Maryland beat Navy 35-21 in the opening game on September 30, 1950. Maryland quarterback Jack Scarbath scored the first touchdown in the new stadium. Scarbath was later named an All-American, and he was runner-up for the 1952 Heisman Trophy as Maryland's first Heisman nominee. View film of the opening game in Byrd Stadium.