Washington Hall — Dormitory constructed in 1940 and named for Washington County, Maryland.  Designed by Howard W. Cutler of the architectural firm Buckler & Fenhagen.  One of the haunted locations on the UMD ghost tour.

Water, Bodies of — There are two catch basins and seven fountains on campus. Paint Branch Creek also travels through the northern portion of the university's acreage, and Guilford Run flows along part of the southern border.

Waterways — A number of campus buildings are named for rivers and other bodies of water in the state of Maryland, including the Chesapeake Bay, Lake Artemesia near campus, Cypress Creek and Swamp on the Eastern Shore, Seneca Creek, the Atlantic Ocean, and the Potomac, Patuxent, and Severn rivers.  Chincoteague Hall, named for Virginia's Chincoteague River, is the only non-Maryland waterway represented.

Weber Garden — Faculty member Joseph Weber, a professor of physics whose research contributed to the development of the laser and the maser, was perhaps best known for his early work on the detection of gravity waves.  The Department of Physics and the College of Mathematical and Natural Sciences dedicated a garden containing some of Weber's original research equipment at the southeast corner of the Physical Sciences Building in 2019.

WeWork — Collaborative workspace located in the Discovery District, adjacent to The Hotel at the University of Maryland.  Features co-working and office space, conference rooms, communal spaces, private offices, and dedicated and hot desks.  First WeWork facility in Maryland and the first on a college campus in the United States.  Dedicated in 2018.

Weinermobile — May 2001 graduate LaToya Morgan is the first Terrapin known to have driven the Oscar Mayer company's 27-foot-long Weinermobile. Ms. Morgan, a communications major, went on the road with the Weinermobile from summer 2001 to summer 2002, traveling an average of 500 miles per week.  Sam Blum, Class of 2013, became the second Terp to take the wheel of the Wienermobile, from June 2013 to June 2014.

White Memorial Library, Charles E. — Library constructed in 1975. The library was located inside the Chemistry Building and was named for Charles E. White, professor and chair of the Department of Chemistry.  The library's holdings were transferred to the STEM Library in Kirwan Hall in 2018.

Who Wants to Be a Millionaire — The first University of Maryland student to appear on this game show, which debuted in 1990, was Emily Guskin, who won $25,000 on the May 4, 2006, installment of the show.  See also Game Shows.

Wildlife — Other than our famous Testudo statues, wildlife sightings on campus include deer, rabbits, squirrels, chipmunks, foxes, snapping turtles, hawks, and over 20 varieties of birds.

Williams Building, A. V. — The building was constructed in 1988 and named for Albert Vaughn Williams (Class of 1917), road contractor.

Willow Oaks — As of 2019, 104 of these trees line McKeldin Mall, including the double row that forms the allee.  The Willow Oak is also the third most populous tree on the campus, behind the white oak and the red oak. 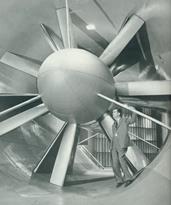 Wind Tunnel — The Glenn L. Martin Wind Tunnel is a low-speed wind tunnel used for aerodynamic research and development since its construction on campus in 1949.  Building was designed by Skidmore, Owings & Merrill.  The tunnel has been used to conduct over 1,800 experiments and projects involving airplanes, battleships, sailboat keels, missiles, antennas, submarines, military ejection seats, automobiles, and athletic equipment. Top speed that can be achieved if the tunnel is empty is 230 miles per hour. More information can be found on the Department of Aerospace Engineering's wind tunnel webpage.

Wishing Well — Located on the grounds of the Rossborough Inn.

WMUC — Among the oldest campus radio stations in the world. In 1937, a radio program was established at the university in partnership with CBS (Columbia Broadcasting System) -- the beginning of a storied history in radio. The first campus radio station, called the Old Line Network, began in 1942, but was shut down in January 1943 due to student enlistment in World War II. The new campus radio station, WMUC, went on the air on October 11, 1948, and with the exception of a few months of rewiring in 1949, has been running continuously ever since. WMUC first accepted female disc jockeys during the 1952-1953 academic year. The radio station has been located in the South Campus Dining Hall since 1974. For more information, see WMUC's station history page of the station website.

WNBA — As of 2019, 19 Terps have played in the WNBA; visit the women's basketball site on umterps.com to find the complete list.  Kristi Toliver, who helped lead the women's basketball team to a national championship in 2006, became the fourth woman ever named to an NBA coaching staff in 2018, when the Washington Wizards hired her as an assistant coach for player development; Toliver was the first active WNBA player to join an NBA staff.

Women of Note, Faculty and Staff — A webpage created by Dave Ottalini in University Communications, now also available at MAC to Millennium.

Women Students — The 1917 Reveille yearbook touted Elizabeth Hook and Charlotte Vaux as the first women to matriculate officially at the Maryland State College of Agriculture in 1916. Miss Hook received a B.S. in entomology in 1920 and Miss Vaux a two-year degree in agriculture in 1918. Evidence recently uncovered in the files of President Harry Clifton Byrd, and confirmed in a commencement program, identifies an earlier bachelor's degree recipient, Grace B. Holmes, in 1919. Unlike Miss Hook, Miss Holmes did not spend her entire collegiate career in residence at the university, so Miss Hook is usually recognized as the first female to graduate with a four-year degree.

The first female student to attend classes at the Maryland Agricultural College was probably Flora Iris Darling, who took the short course in floriculture in 1907.

Women's Basketball Hall of Fame — With the induction of the 2011 class of honorees into the Women's Basketball Hall of Fame, there are now four Terps in the hall: former players and Olympian Tara Heiss (2003) and Jasmina Perazic (2014), long-time coach Chris Weller, inducted in 2010, former player, Olympian, and WNBA star Vicky Bullet, inducted in 2011.

Wood Stove Decathlon — UMD was the only college or university to enter a team in the 2013 Wood Stove Decathlon, sponsored by the Alliance for Green Heat and tied for fifth in the rankings.  Stoves were evaluated on their innovation, affordability, particulate matter and carbon monoxide emissions, efficiency, and market appeal. View a video about the team's Wood Stove Decathlon project.

Wooded Hillock — A 22.4 acre area north and east of the Xfinity Center that is home to eight species of oak, more than 45 species of birds, and five species of bees, among other native plants and animals. In 2009, students and faculty successfully protested the potential development of this area as part of the East Campus project, organizing a "Save the Hillock" petition, passing an SGA resolution against the development, and bringing the issue to a vote at the University Senate. The preservation of this area contributes to the university's current environmental and sustainability policies. The wooded hillock is used as an outdoor classroom for laboratory exercises in several undergraduate and graduate level courses.

Woods Hall — Building constructed in 1948 and named for Albert F. Woods, president of the Maryland State College of Agriculture and the University of Maryland, 1917-1926.  Designed by the architectural firm Gaudreau & Gaudreau.

World Cup, Women's Soccer — Former UMD women's soccer coach Shannon Higgins-Cirovski was a member of the U.S. Women's National Team that captured the 1991 World Cup championship.  Jill Ellis, who served as head coach of the women's national team from 2014 to 2019 and won two World Cups (2015 and 2019), served as an assistant women's soccer coach at UMD from 1994 to 1996.

World Record Holder — Renaldo "Skeets" Nehemiah was a world record holder in the high hurdles during his days on the University of Maryland track team. Skeets went on to qualify for the 1980 Olympic team and played wide receiver for the Super Bowl Champion San Franciso 49ers from 1982 to 1984.

World Series — Charlie Keller (Class of 1937) is the only Terrapin baseball player to have appeared in the World Series and baseball's All-Star Game. Keller led the Yankees to a four-game sweep of the Cincinnati Reds in the 1939 Series, batting .438 and driving in 11 of the 17 Yankee runs. He also participated in the Series form 1941 to 1943 as a Yankee. Brandon Lowe came close to duplicating Keller's feat in 2019 when he was named to the All-Star squad, but he did not play the game. Lowe and Terp Adam Kolarek took to the field for the 2020 World Series, Lowe for the Tampa Bay Rays, and Kolarek for the Los Angeles Dodgers. They joined Keller and two other Terrapins to have participated in the fall classic--Ron Swoboda (Mets, 1969) and Vic Keen (St. Louis Cardinals, 1926). Lowe and Kolarek also hold the distinction of being the only Terps to ever face each other in the World Series; Kolarek struck out Lowe in the eighth inning of Game 4 on October 24, 2020.

Wye Oak Building — Constructed in 2013.  Located in a cluster of facilities-related buildings adjacent to the Xfinity Center and Terrapin Trail Garage.  Named for the Wye Oak, on Maryland's Eastern Shore, that was the largest white oak tree in the United States and the state tree of Maryland from 1941 until its demise in 2002.

Wye Oak — The Class of 1988 planted a seedling of the former state tree next to Reckord Armory to honor John B. Slaughter, Chancellor of the University of Maryland from 1982 to 1988.