Harlem Globetrotters — The world-famous Harlem Globetrotters played in Cole Field House on several occasions.  Their first game on campus was a contest against a College All-Star team on April 14, 1958, and was a fundraiser for the university's M Club and the Athletic Department.  They played the Terps' men's basketball team annually from 1969 to 1971, and their last visit was part of the celebration of the opening of the Xfinity Center on November 12, 2002, when the Terps defeated the Globetrotters 97-79.

Harriet Tubman Department of Women, Gender, and Sexuality Studies—UMD President Darryll J. Pines announced the re-naming  of the Department of Women’s Studies on September 4, 2020, to honor native Marylander Harriet Tubman and her dedication to freedom and equality. This was the first UMD academic department to be named honorifically. The Women’s Studies program was established in 1971 with three initial course offerings and became an official program five years later. Women’s Studies was recognized as a formal department in 1994 and began offering doctoral degrees in 1999.

Harrison Laboratory — Greenhouses constructed between 1950 and 1951; named for Orlando Harrison, state senator and horticulturist.  Razed in 2014 to make way for The Hotel at the University of Maryland.

Head Coach, African American — The first African American to hold a head coach's position at the University of Maryland was Bob Wade, who led the men's basketball team for three seasons, from 1986-87 through 1988-89.

Health and Human Performance, College of — The college traces its origins to the 1890s Department of Physical Culture, which provided instruction designed to "gradually and scientifically" improve the "physical powers" of each student. In 2006, the college became part of the new School of Public Health. More information about the college's history is available on the College of Health and Human Performance anniversary website.

Health Center — Opened in 1964 under the direction of Dr. Lester M. Dyke. The first female director was Dr. Margaret "Maggie" Bridwell, who held the position from 1975 to 2003, introduced an extensive women's health program and new trends in medical care, such as acupuncture and massage, and emphasized preventive health care through community education. 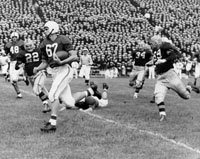 Heisman Trophy — Two Terps have been among the top 5 vote-getters for college football's most coveted award, the Heisman Trophy. Quarterback Jack Scarbath, who scored the first touchdown in Byrd (now Maryland) Stadium, was the runner-up to Oklahoma's Billy Vessels in 1952. One season later, quarterback Bernie Faloney placed fourth in the annual vote, behind Johnny Lattner (Notre Dame), Paul Giel (Minnesota), and Paul Cameron (UCLA). Charlie Wysocki, who set many rushing records for Maryland, was also touted as a Heisman candidate during the 1981 season, but did not place among the top 5. He faced some stiff competition, going up against eventual winner Marcus Allen (Southern California), Hershel Walker (Georgia), Jim McMahon (Brigham Young), Dan Marino (Pittsburgh), and Art Schlichter (Ohio State).

Henson Statue — The University of Maryland dedicated the statue of Jim Henson conversing with Kermit the Frog and the memorial garden that surrounds it, outside the Stamp Student Union, on September 24, 2003. Henson, who graduated from the University of Maryland in 1960, was known around the world for his creation of the Muppets and his work in television with Sesame Street and The Muppet Show. His work in film included six movies starring the Muppets and two fantasy pieces, The Dark Crystal and Labyrinth. The statue, created by sculpter Jay Hall Carpenter, captures Jim Henson and Kermit in bronze, sitting on a red granite bench, and weighs 450 pounds. It is surrounded by a memorial garden, designed by landscape architect Philip Cho. The entire project cost $217,000 and was funded in part by gifts from the Classes of 1994, 1998, and 1999.

Hermann Trophy — The Hermann Trophy, awarded annually by the Missouri Athletic Club to honor the top male soccer player in the country, is soccer's equivalent of football's Heisman Trophy. Patrick Mullins was the first Terrapin (and only seventh player in history) to win the Hermann Trophy in back-to-back years, 2013 and 2014. Mullins was selected by the New England Revolution as the 11th overall pick in the 2014 MLS SuperDraft. The only other Terp to win the Hermann Trophy is Jason Garey (2005), an All-American and a member of the 2005 NCAA championship team who was drafted to the Columbus Crew as the third overall pick in 2006.

Hillel — Established at the University of Maryland in the fall of 1939. Rabbi Ely E. Pilchik was the speaker at the inaugural Sabbath service on November 17, 1939.  Maryland Hillel strives to enrich the lives of Jewish students at UMD by providing them with meaningful Jewish opportunities.

Hoff Theater — Constructed as part of the 1972 renovation of the Stamp Student Union. In 1975, the theatre was named for William Hoff, manager of the union from its opening in 1955 until 1974. The first movie shown at the Hoff was Walt Disney's 1940 animated feature Fantasia.

Holzapfel Hall — Constructed in 1934; named for Henry Holzapfel, Jr., chairman of the Board of Regents, 1941-1943.  Renovated and incorporated into the Edward St. John Learning and Teaching Center, dedicated in May 2017.

Homecoming — The first football game designated as "Homecoming" was the November 24, 1923, contest versus Catholic University. This celebration weekend featured a parade and a dance as well as the dedication of the original Byrd Stadium, located across Route 1 where Fraternity Row now stands. Prior to that time, there was usually a parade of some sort or a pep rally in conjunction with the annual football game versus Johns Hopkins University and a dance at the end of the season at which the football team members were the honored guests.

Honors Program — Founded in 1966 as General Honors.  Honors College, consisting of seven living-learning programs, founded in 2009.  Largest of these programs is University Honors.

Hornbake Library — Constructed in 1972; named in 1980 for R. Lee Hornbake, professor of industrial education, dean of the faculty, and vice president for academic affairs.  Home to the UMD Libraries' Special Collections and University Archives, a digitization lab, the Maryland Institute for Technology in the Humanities (MITH), and a small preservation lab.  One of the haunted locations on the UMD ghost tour.

Huey the Helicopter — Helicopter body located to the north of the Manufacturing Building near the Xfinity Center.  The Maryland Air National Guard gave Huey to the Department of Aerospace Engineering in 1998.