Sadat Chair for Population Development and Peace — Established in 1997 to continue the peace-building efforts of Anwar Sadat, slain Egyptian president. The chair is based in the Department of Government and Politics.

Sculptures — In addition to the statues of Testudo and the Fear the Turtle sculptures, there are 18 sculptures on campus:

Seal — The university's original seal was based upon the Great Seal of Maryland. It incorporated the arms of the Calvert and Crossland families and the figures of a farmer and a fisherman, representing the estates of Lord Baltimore, the founder of Maryland. The new seal, introduced in 1998, consists of a globe in the four colors of the Maryland state flag, the date 1856, honoring the founding of the Maryland Agricultural College, and the words "University of Maryland."

SECU Stadium — Originally named Byrd Stadium.  Constructed in 1950.  Full capacity is 48,055 people. Maryland beat Navy 35-21 in the opening game on September 30, 1950. Maryland quarterback Jack Scarbath scored the first touchdown in the new stadium. The red M painted on the seats in the west endzone first appeared for the 1991 football season. Name changed to Maryland Stadium in December 2015, and then to SECU Stadium, effective October 1, 2022.

Senate, United States — Two former Terrapins have gone on to represent the state of Maryland in the United States Senate, Millard Tydings (1927-1951) and his stepson Joseph Tydings (1965-1971). Gordon Humphrey, Class of 1962, represented New Hampshire in the U.S. Senate from 1979 to 1990. See also Congressmen and Senators, United States.

Seneca Building — Constructed in 1991 and acquired by the university in 2014. Located at 4716 Pontiac Street in the City of College Park. Named for Seneca Creek. Occupied by units in the College of Behavioral and Social Sciences, College of Education, President's Office, Provost's Office, and offices of the Vice Presidents for University Relations and Administration and Finance.

Severn Building — Two University of Maryland building have been named for the Severn River in Anne Arundel County. The first was constructed in 1958 and most recently housed the Office of Technical Liaison. It was demolished during the 1999-2000 academic year to make way for new student housing along Knox Road. The current Severn Building is a former Washington Post printing plant located on Greenbelt Road. The building was renamed in 2010 after it was purchased by the university as part of the first phase of the East Campus development project.

Shipley Field — Athletic field constructed in 1954. It was named in 1956 for H. Burton Shipley, basketball and baseball coach for the University of Maryland. Part of Bob "Turtle" Smith Stadium.

Shoemaker Building — Constructed in 1931. The building was named for Samuel M. Shoemaker, chairman of the Board of Regents, 1916-1933. The building once served as the main library, before the construction of McKeldin Library, and currently houses the Counseling Center.

Shriver Laboratory — Constructed in 1938. The building was named for George McLean Shriver, member of the Board of Regents, 1929 to 1935. Demolished in 2014 to make way for the Edward St. John Learning and Teaching Center, which opened in 2017.

Shuttle-UM — The student-operated, free, campus bus service for students, faculty, and staff was established in 1976. For the fall 2019 semester, Shuttle-UM operated 24 bus routes.

Soap Opera — Part of the November 14, 2002, episode of the soap opera As the World Turns was filmed on campus. Characters Aaron, Alison, and Lucy come to the University of Maryland. Alison and Lucy volunteer to play on an Ultimate Frisbee team, while Aaron dons a pink rabbit costume to serve as a cheerleader during the Frisbee game, in exchange for a place to stay for the night with a UMD student.

Soccer, Women's — Women's soccer was first organized in 1931, but the team's first official competition was in 1987. Between 1995 and 2012, the team made thirteen appearances in the NCAA tournament and earned the #1 seed for the first time in 2010. Also in 2010, Coach Brian Pensky was the first women's soccer coach at Maryland to be named National Coach of the Year. More information about the team's history may be found on umterps.com.

Softball — The Terrapin softball team initially took to the field in 1995 and won its first ACC championship in 1997. The team advanced to the NCAA Regional Finals in 1999, 2010, 2011, and 2012. More information about the team's history may be found on umterps.com.

Solar Car — The university's solar car, "Pride of Maryland," was constructed by some 60 engineering students to compete in the 1990 GM Sunrayce USA. The team placed third in this race and went on to compete in the 1991 World Solar Challenge across Australia and in Japan before retiring the car. "Pride of Maryland" appeared again briefly in 1993 when it was featured in the inaugural parade for President Bill Clinton. The car will be placed in one of the Clark School of Engineering buildings in 2019.

Solar Decathalon — The University of Maryland began participating in the Solar Decathlon competition, sponsored by the U.S. Department of Energy, in 2002. The team won the competition to design, build, and operate the most attractive and energy-efficient solar-powered house in 2011, with their structure named WaterShed. The 2007 team won the BP Solar People's Choice Award in the decathlon and finished ahead of all U.S. teams in the overall competition with their LEAFHouse; this home is still located on campus, near the intersection of Paint Branch Drive and University Boulevard East.

Solar Panels — As of 2019, there are nearly 10,000 solar panels positioned at the Mowatt Lane, Terrapin Trail, and Regents Drive parking garages, Severn Building, and Institute for Bioscience and Biotechnology Research. Information about the energy generated, carbon offset, hours of light, and trees saved by this project is available as part of the SustainableUMD website.

Sororities, African American — Zeta Phi Beta was the first African-American sorority to establish a chapter on campus. The national sorority, headquartered in Washington, DC, granted the Eta Epsilon chapter its charter on October 14, 1973.

Sororities, First — Kappa Kappa Gamma was the first sorority on campus. The chapter, originally known as Sigma Delta, was formed in 1920, only four years after women were admitted to the university. The group lost its charter on May 14, 1992. A list of active sororities on campus is available on the Department of Fraternity and Sorority Life website.

Sororities, Latina — The Upsilon chapter of Lambda Theta Alpha Latina Sorority is the first Latina sorority and the first Latino/a Greek organization established on campus. It received its charter on June 4, 1995.

St. Mary's Hall — Dormitory constructed in 1932; named for St. Mary's County, Maryland. The building was originally named Margaret Brent Hall in honor of the 17th-century entrepreneur who served as the executor of Maryland Governor Leonard Calvert's estate when he died in 1647. Brent is also renowned for being the first woman in the Maryland colony to request the right to vote.

Stamp, Postage — The first alumnus to be featured on a postage stamp was Jim Henson (Class of 1960). Henson, the creator of the world-famous Muppets, joined Kermit the Frog, Miss Piggy, Rowlf the Dog, Fozzie Bear, and several of his other early characters on commemorative stamps issued by the United States Postal Service on September 28, 2005, in Los Angeles, CA. The first faculty member to receive this honor was Eugenie Clark, aka “The Shark Lady,” who taught marine biology at UMD from 1968 until her retirement in 1992; her stamp was released in 2022. Alumna Judith Resnik, one of the astronauts killed in the 1986 explosion of the space shuttle Challenger, appeared on stamps in Guyana, Guinea-Bissau, and Central Africa and on a number of first day covers.

Stamps, Postage, Designers — Rodolfo Castro, Class of 2021, and his wife Lisa Catalone Castro, designed the “Happy Birthday” stamp issued in fall 2021 by the U.S. Postal Service. Rodolfo had previously designed a series of stamps honoring Supreme Court Justices, and Lisa had created an image for the “Love” series of stamps.

STEM Library — Located at the end of Kirwan Hall. Formed in 2018 by the merger of the Charles E. White Chemistry Library and the Engineering and Physical Sciences Library.

Streaking — Streaking, or the practice of nude running, was a phenomenon that criss-crossed the United States in the late 1960s and early 1970s. Terrapins are sometimes credited with coining the term "streaking," but the first printed use comes from a 1967 Carleton College publication entitled "Loosely Speaking." Carleton students John D. Bell, Mark Dubach, H.G. Fuller, and Paul Menzel defined "streak" as "to run, nude and impudent, from one building to another any time after dark." Streaking appears to have first occured at Maryland in 1969. According to a Diamondback article, the University's first nude female runner streaked across Cambridge complex at 11:00 p.m. on Monday, February 24, 1969, pursued by at least 20 male students. Although male nude runners were nothing new to the Cambridge complex, the night before the coed's sprint was especially chaotic with two male streakers, "obscene chants, and a brief but massive panty raid." Two photographs of mass streaks appeared in the 1974 Terrapin yearbook, followed by a quote from William Thomas, acting vice chancellor, condemning these "nude running incidents."

Student, First — George H. Calvert, the 17-year-old son of Maryland Agricultural College founder Charles Benedict Calvert, was the first student to register in the initial MAC class in 1859. His brothers Charles, William, and Eugene joined him in the first class to enter the college.

Student Government Association — Founded in 1919 as the General Students Assembly. This student assembly was dissolved in spring 1929 and replaced by a new body named the Student Government Association that fall. John T. O'Neill served as the first president of this new organization. The first female president of the SGA was Frances Pfeiffer, was elected the chairwoman of the Student Board, the war-time version of the SGA, in 1944. The first Black and Women's (Womxn's) caucuses were formed in 2019.

Student Groups — The first two student groups on campus were the Mercer Literary Society and the Calvert Fraternity. Two of the oldest student groups still active are the Terrapin Trail Club, founded in 1937, and Gymkana, founded in 1946. For more information, see the list of current student groups that are officially recognized by the undergraduate and graduate student governments.

Summer School — The Cooperative Extension Service began the first summer school on campus in 1906 for farmers and their families.

Sundial — A large sundial is located in the center of McKeldin Mall. It was originally a gift from the Class of 1965, the Department of Physics and Astronomy, and friends of Professor Uco Van Wijk, who died in 1966. Dr. Van Wijk was the first faculty member in the astronomy program and was responsible for establishing the Observatory on campus. The sundial was renovated with donations from the Class of 1990.

Survivor — The popular television reality/game show Survivor featured two Terps in its 39th season, Chelsea Walker, Class of 2013, and Noura Salman, Class of 2004, were marooned on Fiji as part of the "Idols of the Island" competition. Visit Maryland Today to learn more about these enterprising competitors.  Alumna Penny Ramsey was a contestant on Survivor: Thailand in 2002 and was voted off the island in the tenth episode.

Survivor Garden — Garden outside the southeast corner of the Stamp Student Union, along Campus Drive, dedicated to all survivors of all violence in 2006 by the student organization Student Advocates for Education about Rape.

Susquehanna Hall — Constructed in 1991; named for the Susquehanna River. 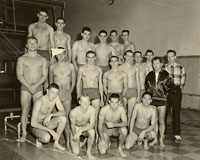 Swimming, Men's — First organized in 1957. ACC champions from 1960 to 1964. Terp James Williams was the first African American member of a swim team in the Atlantica Coast Conference (ACC). Team was eliminated in 2012.

Swimming, Women's — Began as an intramural sport in 1924. Official competition began in 1974, and scholarships were offered to team members for the first time in 1976. The women won their first ACC Championship in 2004. Team was eliminated in 2012.

Symons Hall — Constructed in 1940 and named for Thomas B. Symons, a 1902 graduate of the Maryland Agricultural College who later served as dean of the College of Agriculture (1937 to 1950), acting president of the University of Maryland (1954), and director of the Cooperative Extension Service (1914 to 1950).