Ice Cream — The University of Maryland Dairy is famous for its ice cream, which is made daily and has been recognized as the Washington metropolitan area's best. Production began in 1924.  The Dairy introduced five new flavors in the spring of 2004: Fridge Fever, Exam Cram, Midnight Madness, Spring Break, and Fear the Turtle. Three more flavors debuted in 2005: Comet Crunch, Campus Squirrel Crunch, and 1856. Mochalatta Mote, honoring University President Dan Mote, and Let's Tour S'More were introduced in 2010. To celebrate the 13th anniversary of Maryland Day and President Wallace Loh's inauguration, Dining Services created a special Vani-Loh Mango ice cream in 2011, which was served in the Dairy for a limited time. Other limited time flavors have included Senior Swirl, vanilla ice cream with a chocolate swirl, red and yellow sprinkles, and brownie pieces, and Star-Spangled Explosion, a hand-crafted small-batch treat that commemorated the 200th anniversary of the War of 1812 and the writing of the "Star-Spangled Banner;" the latter featured strawberry ice cream spiked with sherry and swirled with red, white, and blue sprinkles and milk chocolate malted (cannon) balls.  Other flavors have honored various coaches, including Terpresso (Missy Meharg), Brenda's Peanut Butter Fresee (Brenda Frese), and Turge Turtle Crunch (Mark Turgeon).  A more detailed history of ice cream production is available in a 2004 news release from the UMD Newsdesk.  Ice cream sales, previously based in Turner Hall, moved to the Stamp Student Union in 2014.

Ice Cream, Mr. and Mrs. — Wendell S. and Ruth Weaver Arbuckle were known as "Mr. and Mrs. Ice Cream."  Dr. Arbuckle was taught dairy science at UMD from 1949 to 1972 and wrote the standard textbook on ice cream history and production.  He invented dozens of flavors including sweet potato, mint julep, cinnamon, and cantaloupe.  Mrs. Arbuckle traveled around the world dispensing advice on marketing and selling ice cream.  Together, they formed Arbuckle Inc., an ice cream consulting firm based in College Park, and offered classes at UMD and elsewhere on ice cream manufacture.  Wendell Arbuckle died in 1987, and Ruth in 2007.

IDEA Factory, E.A. Fernandez — The university broke ground for the E.A. Fernandez IDEA (Innovate, Design, and Engineer for America) Factory in spring 2019.  The facility will serve as an extension of the Jeong H. Kim Building and will include open workspaces for students, prototyping facilities, engineering design and instructional studies, a mobile applications lab, an "Internet of Things" lab, a student-run incubator, and labs focused on studying robotics, quantum technology, and technology.  The building will be named for Emilio Fernandez, a 1969 electrical engineering graduate.

Igdoof — Alumnus Jeff Kinney, Class of 1993, author of the Diary of a Wimpy Kid children's book series and writer and designer of online games, got his start as a cartoonist in The Diamondback.  His "Igdoof" comic strip first appeared in the paper on January 22, 1992.  Visit the UMD Student Newspapers database to view this landmark issue.

Intensive Education Development Program — established in 1968 as one of Maryland's primary efforts to provide access to a university education for under-represented groups of students, many of them African American. A history of the IED program from its beginnings through 1976 is available on the Office of Undergraduate Studies website. 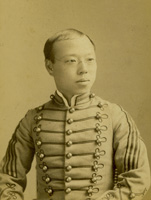 Pyon Su (or Penn Su), who received his B.S. degree in 1891, was the first Korean student to graduate from any American college or university. He was born in Korea in 1861 and entered the Maryland Agricultural College in the fall of 1887. He was killed in College Park in a tragic train accident on October 22, 1891. He is buried in St. Joseph's Cemetery at Ammendale in Beltsville, Maryland.

The first Chinese student at the Maryland Agricultural College was Chunjen Constant Chen from Shanghai. He entered in 1915 and completed three years of study in College Park before transferring to Cornell, where he received his B.A. degree. He returned to College Park where he received his M.S. in Agriculture in 1920. After a hiatus of more than 40 years, he returned to the University of Maryland, where he taught Chinese from 1956 to 1967. He died in 1978. All four of his sons attended the University of Maryland.

The first Japanese student at the Maryland State College was Masao Yoshikawa, who enrolled in 1917-1918 and took special courses in horticulture.  His brother, Masanori Yoshikawa from Yamada, Hyuga Province, matriculated in 1919 as a sophomore general chemistry major but withdrew during his junior year due to illness. The first Japanese student to graduate from the University of Maryland was Toshio Keta from Tokyo. He graduated in 1956 with a B. S. in accounting. While attending the university, Keta lived in the home of Dr. Gordon W. Prange.

Some of the first documented students from Europe were Salvador Oliver (Spain; attended one year in 1908); L. D. Andriopoulos and A. B. Xerocostas (Issari, Greece, Class of 1915); Heinrich Wilhelm Heerman (Westfalen, Germany, 2-year degree in agriculture, 1915); and Vaso Trivanovitch (Yugoslavia, Class of 1922).

Alyia Nadhet Al-Shawi, who earned a B.S. in home economics in 1958, is likely the first University of Maryland graduate from Iraq.

Iribe, Brendan, Center for Computer Science and Engineering — Named for Brendan Iribe, UMD alumnus, founder of the Oculus virtual reality firm, and on of the video game industry's most successful entrepreneurs.  Dedicated on April 1927, 2019.

Institute of Technology, Glenn L. Martin — Named in 1955 for Glenn L. Martin, aircraft pioneer. A bust of Martin decorates the lobby of the Engineering Building.