Daimler Chrysler Berlin Prize — Associate professor David Poeppel, who holds joint appointments in the university's departments of linguistics and biology, won the 2004 Daimler Chrysler Berlin Prize awarded by the American Academy in Berlin. He is the first scientist to win this fellowship.  This prize funds a year-long fellowship awarded annually to scholars, writers, composers, and artists based in the United States who represent the highest standards of excellence in their fields.  Fellows receive a monthly stipend, partial board, and accommodations at the American Academy's lakeside Hans Arnhold Center, in Berlin's Wannsee district.

Dairy — Sales room for the university's famous ice cream.  Relocated to the food court in the Stamp Student Union in 2014.  See Turner Hall.

Dancing with the Stars—Vernon Davis, who attended UMD from 2002 to 2006 and played in the NFL for the San Francisco 49ers, Denver Broncos, and Washington Redskins, became the first Terp to compete on the reality television show Dancing with the Stars as part of the cast for the show’s 29th season, which began in September 2020.

Day Dodgers — An old term used as early as 1908 to refer to students who commute to campus.  These students eventually formed their own organization, the Daydodgers Club, which continued in existence until 1960, when it became the University Commuters Association.

Deans, African American Men — Ben Holman, who served as acting dean of the College of Journalism from 1980 to 1981, is considered to be the university's first African Ameican male dean.  Other early African American male deans include Robert L. Hampton, dean of Undergraduate Studies, and Melvin Hall, dean of Continuing Education, both of whom were appointed in 1994, and Keith Morrison, who served as dean of the College of Arts and Humanities from 1996 to 1997.

Denton Hall — Dormitory constructed in 1964. It was designed by Ted Englehardt and named for Denton, Maryland, county seat of Caroline County.

Diamondback — Current name for the primary student newspaper.  Originally entitled The Triangle.  First issue appeared January 1, 1910, and the first editor was Millard Tydings.  Name changed multiple times until the paper began publishing as The Diamondback on June 9, 1921.  Online access to issues is provided through the Student Newspapers database and the Diamondback's website.  The first female editor-in-chief of the Diamondback was Jackie Brophy, who took over the reins of the paper in the summer of 1944 with a handful of writers; at the time, the paper was published once a week due to wartime restrictions.  The first African American editor-in-chief was Ivan Penn, who led the paper from 1991 to 1992.

Diamondback Garage — Technology and innovation hub located on the first level of the parking garage behind The Hotel at the University of Maryland.  Opened in November 2018.

Dingman Center for Entrepreneurship — Created in 1986 and named for alumnus Michael D. Dingman, who donated funds to the Robert H. Smith School of Business to create the center.

Discovery District — Research space located near the College Park Metro Station designed to foster innovation and collaboration between UMD students and faculty, area businesses, and federal agencies.  A branch of the Discovery District will open in Crystal City residents, local businesses, and UMD alumni in the area with university students and faculty.

Diving — The diving team is a part of the swimming team. Men's competition began in 1957, women's in 1976.  The team was eliminated in 2012.  James Williams, now known as Jason Williams, was the first African American to compete in swimming and diving in the Atlantic Coast Conference (ACC) in 1964. 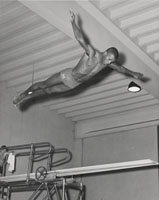 Dormitory, Oldest — Calvert Hall, originally constructed in 1914, is the oldest dormitory on campus.  This was the first building constructed at the Maryland Agricultural College after the great fire of 1912.

Driskell Center, David C., for the Study of the Visual Arts and Culture of African Americans and the African Diaspora — Study center established at the University of Maryland in 2001.  Named for David C. Driskell, Distinguished University Professor Emeritus of Art, artist, art historian, collector, curator, and philanthropist.  The Center is dedicated to collecting, documenting, and presenting African American art.  For more information, visit the Driskell Center's website.

Drones — The university maintains two facilities for testing unmanned aircraft systems, otherwise known as drones.  The Fearless Flight Facility (F3), located on campus, is an outdoor, completely netted installation; the netting allows it to be classified as an indoor facility under Federal Aviation Administration rules, so drones can be flown there despite the 15-mile no-fly zone that surrounds Reagan National Airport.  The second facility, the UAS Test Site, is located in St. Mary's County and is completely outdoors.

Duke's Tree — One of the campus's landmark trees, this massive, 76-year-old white oak (state tree of Maryland) was located across the street from the Memorial Chapel until August 2012, when it was taken down after suffering a secondary lightning strike and a borer infestation. Named after former university groundskeeper Jerome "Duke" Sellers. 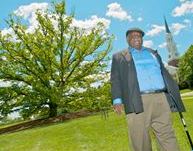