Vice Presidents — Four United States Vice Presidents are known to have visited the University of Maryland: Lyndon B. Johnson, Hubert H. Humphrey, Spiro T. Agnew, and Al Gore. Johnson and Humphrey both served as commencement speakers while Vice President, in 1963 and 1965 respectively. Agnew spoke at commencement in 1967, before becoming Vice President. In 2000, during his presidential campaign, Gore used the university as the setting for an announcement of his plans for college tuition tax credits and new college savings accounts for taxpayers, and he returned to UMD as the commencement speaker in May 2018.

Vietnam Memorial — Constructed in 1988 on the south side of Memorial Chapel. The memorial was established by students in the general honors program.  Refurbished and re-dedicated in 2010 as part of the celebration of the Garden of Reflection and Remembrance.

Vitamin B12 — Faculty member Mary S. Shorb, a research professor in the Department of Poultry Husbandry, played a key role in the discovery of Vitamin B12. 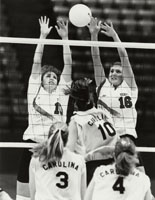