Radio School, First — The Department of Speech began a radio school in conjunction with the Columbia Broadcasting System during the 1937-1938 academic year, the first of its kind in the United States.

Reckord Armory — Constructed in 1944; designed by Hopkins and Fletcher. Named for Major General Milton A. Reckord, Adjutant General of Maryland. The building served as a dormitory for GIs returning from World War II. The two mortars at the front of the building are believed to have been used by the Maryland Militia during the Civil War. The world-famous rock band Hootie and the Blowfish filmed a portion of their music video for the song "Only Wanna Be With You" on the floor of Reckord Armory.

Red and White Game — Annual intra-squad scrimmage at the end of spring football practice. These spring football games date to at least 1948, when then-coach Jim Tatum actually held four of them. In 1951, the scrimmage became a contest between current Terps and recent alumni, and this lasted until 1962. In 1963, the contest once again became an intra-squad scrimmage, with the first usage of "red" and "white" to describe the teams appearing in 1964. Prior contests called the divided squads "Terps," "Old Liners," or "Free Staters." Since 2001, the Red-White Game has been a featured event on Maryland Day, the campus-wide open house conducted each year on the last Saturday in April.

Regents, Board of — The University System of Maryland, comprised of thirteen individual institutions, is overseen by a Board of Regents who are appointed by the governor of Maryland.

Registration — The automation of the registration process began in 1972. Prior to that year, students waited in endless lines to register, only to see classes close before their eyes.

Rhodes Scholars — Tom McMillen earned this distinction in 1974. At the time, he was also the all-time top scorer in Maryland basketball history. Fang Cao was the second University of Maryland student named a Rhodes Scholar, in 2014. University President Wilson H. Elkins was the first Rhodes Scholar to be associated with the campus. 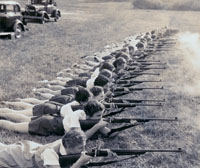 Roads — As of 2019, there were approximately 20 miles of roadway on campus.

Robots — Maryland students won first prize in the prestigious Japanese Robot Grand Prix in Tokyo in 1996. Maryland was the only U.S. university to enter the competition. A Robotics@Maryland team, comprised of students from the Clark School of Engineering and physics, math, and computer science majors from across the campus, also took first place in the Association for Unmanned Vehicle Systems International and Office of Naval Research 11th Annual International Autonomous Underwater Vehicle (AUV) Competition in 2008.

Rockets — The University of Maryland has long been in the forefront of space research. Dr. S. Fred Singer, who pioneered many of the university's early ventures into rocketry and satellite research, designed the "Terrapin" and "Oriole" high-altitude rockets which were built and launched at very low costs compared to the value of the data they gathered. The "Terrapin," a fifteen-foot, two-stage rocket, weighing approximately 225 pounds, could soar eighty miles into space at speeds of up to 3800 miles per hour; the first test firing of this rocket occurred on September 21, 1956.

Rossbourg Club — One of the earliest organized social clubs on campus. First appeared in 1891. Likely named after the Rossborough Inn. The club organized one dance a month, and its officers were in charge of inviting guests, providing refreshments, and the condition of the dance floor. First president of the Rossbourg Club was Pyon Su, the first Korean student to graduate from any U.S. college or university, who received his degree from the Maryland Agricultural College in 1891. 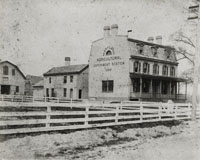 Rossborough Inn — Constructed between 1802 and 1814 and named for the Ross family. The Rossborough originally served travelers on the main road between Baltimore and Washington. The inn has also served as the headquarters for the Agricultural Experiment Station, a dormitory, and the home of the Faculty/Staff Club. Extensive renovations have altered the original appearance of the exterior significantly, which is currently home to the Office of Undergraduate Admissions. The Rossborough is alleged to be the most haunted building on campus and is one of the 11 stops on the UMD ghost tour.

ROTC — Established at the university in 1916 following passage of the National Defense Act, which created Army ROTC. Army ROTC left the university in 1950 but resumed its place on campus in 2003. The university also has Air Force and Naval ROTC units. Mandatory participation in ROTC for all male students abolished in 1965. Lt. Col. Larry Rentz became the first African American Army ROTC program director at UMD in fall 2015.

Rotocraft Center, Alfred Gessow — One of three centers established by the Army Research Office in 1982. The center was named for Alfred Gessow, leading helicopter expert and professor emeritus in the Department of Aerospace Engineering.