The 1859 catalog also lists vacancies for:

"Fear the Turtle" — University slogan first developed in 1998 by alumnus Edward Downey. It became immensely popular with the men's basketball team's 2001 trip to the NCAA Final Four. Wilton Andrews (Drew) Elburn Jr., from Timonium, MD, was the first person to trademark this phrase. It is also the name of one of the five flavors of ice cream introduced at the Dairy in spring 2004.  The university registered its trademark for this phrase on September 13, 2005.  A portion of the proceeds from the sale of all "Fear the Turtle" merchandise sold is donated to projects designed to preserve the diamondback terrapin population.

Fear the Turtle Sculptures — The university created a series of 50 turtle sculptures to celebrate its sesquicentennial in 2006.  Patsy Mote, the wife of then-UMD President C.D. (Dan) Mote, led a juried competition to select the artists to decorate these pieces.  The resulting fantastic creatures were displayed around the state to mark the 150th anniversary.  Those turtles that were sponsored outright were returned to their donors at the end of the year.  All others were auctioned off to benefit scholarship funds for UMD students.  Of the 50 original statues, the one entitled "Terps Basketball Legends," previously located at the Xfinity Center, has been retired due to weather, and ten additional pieces remain on campus:

Fearless Flight Facility (F3) — Outdoor, completely netted installation for testing unmanned aircraft systems, known more commonly as drones; the netting allows it to be classified as an indoor facility under Federal Aviation Administration rules, so drones can be flown there despite the 15-mile no-fly zone that surrounds Reagan National Airport.

Fencing — Although fencing began as an intramural sport for women and an extramural/club sport for men in the 1930s, the university did not field a varsity team until 1971, which at first as all-male.  Two-time All-America Howard Labow was a member of the team from 1973 to 1977 and later served as a coach for the Israeli fencing team in the 2000 Summer Olympics.  The first female varsity fencer was Kathy Butler, a team member in the 1974 season.  The team was discontinued in the early 1980s.

Fenway Park — Fenway Park is far better known as the home of the Boston Red Sox, but it was not uncommon in the mid-20th century to see football played in the shadow of the Green Monster. The Terps took on the Boston University Terriers in Fenway twice, first on November 12, 1949, when Maryland claimed a 14-13 victory in front of a crowd of 30,000, and the second time on November 1, 1952, a decisive 34-7 win for the Terps. Red Sox owner Tom Yawkey ended football at Fenway after the 1956 season when he decided to resod the entire baseball field and didn't want college football players tearing up his new grass.

Ferdinand the Bull — A gentle bull who liked to smell the flowers, featured in a famous children's book, The Story of Ferdinand, authored by alumnus Munro Leaf (Class of 1927) in 1936. It took Leaf less than one hour to create this tale that Mahatma Ghandi declared was his favorite book. Walt Disney adapted the book into an Academy Award-winning short film.

Fernandez, E.A., IDEA Factory—dedicated in 2022 and named for alumnus Emilio Fernandez, Class of 1969, an engineer, businessman, and inventor. The building houses the Alfred Gessow Rotorcraft Center, a robotics and autonomy center, collaborative spaces, the Quantum Technology Center, and other specialized laboratories. IDEA stands for Innovate, Design and Engineer for America.

Fiction — The first known work of fiction about the University of Maryland is The Long Gainer by William Manchester, published by Little, Brown and Company in 1961. A second work that features the university as its setting is A Higher Education by Redge Mahaffey published by Ramsgate Press in 1989. John Steinbruner, a professor in the university's School of Public Policy, featured UMD faculty member David Turner as the main character in his 2011 novel, The Secular Monastery.  Westminster, MD, author Robert Wack's work, In Apple Blossom Time, published in 2013, features a UMD mathematics professor named Willem Jacob van Stockum as the lead character.  Magic Number: The Actuary's Diary by Deb Hosey White is set in 1970s College Park.  Juliana Barnet, a former union organizer, used stories she heard about workplace abuse at university-sponsored forums in 2010 to write a novel, entitled Rainwood House Sings, based on issues encountered by workers at UMD.

Fictional Characters — The University of Maryland is the alma mater of several characters from television and movies. Liz Lemon, a main character on the television show, 30 Rock, played by actress Tina Fey, is a graduate of the university; Liz attended the university on a partial competitive jazz dance scholarship. Dana Scully on The X Files majored in physics while at UMD, and Jackie Vance, wife of the director of NCIS, on the CBS Television show NCIS, also attended UMD. Director and Mrs. Vance met at a UMD basketball game where they saw Len Bias play, as recounted in the NCIS episode entitled "Knockout." The NCIS episodes "Engagement Part I" and "Engagement Part II" also featured a Maryland journalism graduate, Gabriela Flores, a Marine officer who was the subject of a massive search in Afghanistan. Emily Appleton, the mother of Ben Gates in the movie National Treasure II: Book of Secrets was a math professor at the University of Maryland. The university was also the setting for a portion of an episode of a mid-1970s sitcom called That's My Mama, which was set in Washington, DC. As part of the seventh episode of the show's second season, which aired October 22, 1975, the character Leonard, played by Lisle Wilson, decides to become a weekend dad to a young boy and takes him to a Maryland-Clemson football game.  Characters Nathan Royal Scott and Haley James Scott from CW Television's One Tree Hill, which ran from September 23, 2003, to April 4, 2012, both attended the University of Maryland.

Fields Prize — Two Terrapins have won the Fields Prize, the top award in mathematics worldwide, alumnus Charles Fefferman in 1978 and faculty member Sergei Novikov in 1970.  Fefferman was the youngest recipient of this award to date.  The Prize is given every four years to two, three, or four mathematicians under the age of 40 at the International Congress of the International Mathematical Union.

Fire — The two largest campus buildings were completely destroyed by fire over Thanksgiving weekend in 1912. The conflagration began during a holiday dance, but the official cause of the fire was never determined. No one was killed or injured, but most of the classrooms, dormitory space, and administrative offices lay in ruins when the fire was extinguished. To learn more about the Maryland Agricultural College's 1912 fire, visit The Great Fire online exhibit.

First Ladies — Three First Ladies have visited the University of Maryland. Eleanor Roosevelt spoke on campus on April 13, 1938, to urge young people to prepare for civic involvement and returned to campus in 1944 in connection with the United Nations Relief and Rehabilitation Administration program. Hillary Rodham Clinton served as the commencement speaker in May 1996. Michelle Obama attended a Maryland men's basketball game with her family on November 17, 2013, to cheer on Oregon State, a team coached by her brother, Craig Robinson.

Food Co-op — Student-run vegetarian and vegan dining option.  First opened in the Student Union in 1975.  Closed its doors in May 2019.  For more information about the history of the Co-op and how to access its archives, visit the Maryland Food Collective records. 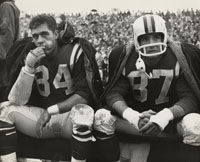 Football, Alumni-Varsity Game — The first spring alumni-varsity football game was held on April 27, 1951, under the auspices of the M Club.  Honorary Member Coach Jim Tatum and alumni Joe Deckman and Ralph Shure organized the event.  The game was an annual event until 1965 with the profits going to the M Club's Scholarship Fund.

Football Uniforms — In 1961, the University of Maryland was the first collegiate football team to place the surnames of its players on the backs of their uniforms along with their numbers, following a trend established by the professional American Football League and baseball's Chicago White Sox.

Fossils — Bretton Kent, an instructor in the UMD Department of Entomology, helped design the life-size 52-foot model of Carcharocles megalodon, a giant shark, that was installed in the cafe of the Smithsonian's National Museum of Natural History when the Davi H. Koch Hall of Fossils-Deep Time opened in 2019.

Founder — Charles Benedict Calvert, prominent planter and landowner in Prince George's County, along with his brother George and their wives, sold the original 428 acres of land for the campus to the Maryland Agricultural College (MAC). He is considered to be the founder of the MAC, now known as the University of Maryland.

Founding Date — The Maryland Agricultural College, as the University of Maryland was then known, received its charter from the Maryland General Assembly on March 6, 1856.

Fountains — Fountains burble adjacent to the Engineering Building and Samuel Riggs IV Alumni Center and in Hornbake Plaza, Tawes Plaza, and McKeldin Mall.  Two small water features, similar to fountains, are also located in the Garden of Reflection and Remembrance, adjacent to the south side of Memorial Chapel.

Fraternities, African American — The first historically African American fraternity to establish a chapter on campus was Iota Phi Theta. The Nu Chapter was chartered on August 13, 1971. For information on current chapters, visit the Department of Fraternity and Sorority Life website.

Fraternities, Oldest — Gamma Pi, which later became Sigma Nu, was the first official fraternity on the College Park campus, recognized on September 18, 1913. Gamma Pi was followed by Alpha Phi, recognized on October 28, 1913, and Iota Sigma, which became Sigma Phi Sigma in 1916, on January 15, 1914.  For information on current chapters, visit the Department of Fraternity and Sorority Life website.

Fraternity Row — Fraternity row was constructed between 1914 and 1963. It is now home to 14 of the campus's fraternity and sorority chapters.