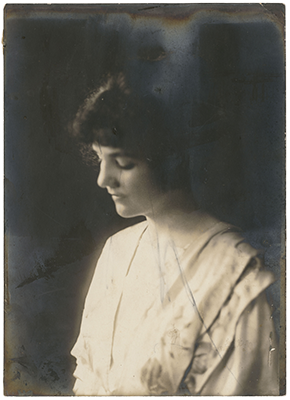 Katherine Anne Porter’s reputation as an important American 20th Century writer rests on the stories included in her Collected Stories (1964, U.K.; 1965, U.S.). This collected edition includes most of the short fiction that she published in periodicals and collected editions dating from 1922. Her other major publications include a single novel Ship of Fools (1962), which became a best-seller, and her Collected Essays and Occasional Writings (1970).

"Memory for me is a tidal wave. I have lived for so long and so many lives, I hardly dare to begin with even the smallest, most trivial-seeming recollection. Nothing is trivial, not for a moment, if you really delve into the past. It can stop your heart for a beat or two."

Born Callie Russell Porter on May 15, 1890, she was the fourth of Harrison and Mary Alice Porter's five children. Her childhood was marked by the death of her mother in 1892 and the death of her grandmother, Catherine Ann Porter, in 1901. It was this grandmother whose name she would later adopt with only a slight orthographical change. Porter’s family lived in several different locations around Texas during her youth, and though she was enrolled briefly in a private girls’ school, much of her education was acquired through a lifetime of extensive reading on varied topics.

Callie Porter’s family life continued to be tumultuous following her marriage to John Henry Koontz in 1906. She divorced in him 1915, and, by 1917, she had married and was divorced twice more. Her health was also fragile: she contracted tuberculosis in 1915, which required treatment in sanatoriums in Texas. After arriving in Denver in 1918, she very nearly died in the influenza epidemic that ravaged the country at that time. Despite these personal and medical troubles, Porter managed to begin work as a writer during this period. She published her first poem in 1912, worked briefly in motion pictures in Chicago in 1914, and wrote for newspapers in Forth Worth in 1917 and in Denver in 1918-1919.

Porter pursued her goal of a writing career in earnest when she moved to Greenwich Village in October 1919. She wrote publicity releases for movies, began collaborating on ballets, and published short stories, three for children, in magazines with national circulations, before travelling to Mexico in November 1920 . While living in Mexico, Porter edited and wrote for the English language section of El Heraldo de Mexico and the English language Magazine of Mexico. Porter left Mexico before September 1921 but returned for three months in the spring of 1922 expressly to write Outline of Mexican Popular Arts and Crafts, the catalog for an exhibit of Mexican art that was mounted in Los Angeles in November 1922.

Her experiences in Mexico, including those of a third trip in 1923, provided Porter with the material for three short stories published in Century magazine: "Maria Concepcion" (1922), "The Martyr" (1923), and "Virgin Violeta" (1924). These achievements, combined with her freelance editing and book reviews (published mainly in the New York Herald Tribune), drew Porter further into literary and intellectual circles while New York City served as her primary residence. She established friendships with Elinor Wylie, Genevieve Taggard, Josephine Herbst, Caroline Gordon, Malcolm Cowley, Dorothy Day, and Robert Penn Warren, among others. She reveled in an active social life and was a prolific letter writer to distant friends and relatives.

Porter undertook a major project in 1927 when she signed a contract to write a biography of Cotton Mather with the publishing house of Boni and Liveright. In late 1927 and early 1928, she lived in Salem, Massachusetts, for several months, while researching Mather's life. In spring 1929, her friends funded a trip to Bermuda so that she could complete the biography. Porter was seriously ill at the time, partly from emotional distress, and the trip aided her recovery. She found solitude and wrote a great deal but was not able to complete the Mather biography. In fact, the book was never completed, despite extensive research and nearly fifty years of sporadic writing efforts, including another contract in 1965 with Seymour Lawrence.

Porter worked on short stories while in Bermuda. During her visit, she made progress on one of her best stories, "Flowering Judas," which was published in Hound & Horn in 1930. That year, a book of stories with "Flowering Judas" as the title story appeared while Porter was again in Mexico. This trip to Mexico became an extended sixteen-month stay, with Porter continuing to write more essays and reviews. Her financial situation, which was troublesome through most of her life, was improved by a Guggenheim fellowship of $2000, which she used for a long-desired trip to Europe. 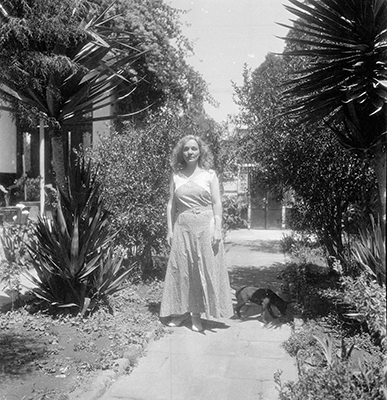 "It is not a career, it is a vocation; it is not a means to fame and glory--it is a discipline of living--unless you think this, it is better not to take it up."

In August 1931, Katherine Anne Porter and her companion and eventual husband, Eugene Pressly, departed from Mexico on the German ship S. S. Werra. The journal she kept during this journey became the basis for Ship of Fools, the novel she published thirty-one years later. After four months in Berlin, Porter visited Paris and Madrid before moving with Pressly, who had received an appointment in the American foreign service, to Basel, Switzerland, for six months, where she lived from June to December 1932. When Pressly was posted to the American Embassy in Paris, they settled there for nearly four years, marrying in March 1933. In Paris, Porter developed a circle of friends that included Monroe Wheeler, Glenway Wescott, and Barbara Harrison, who became lifelong supporters.

The Paris years were very productive--much of Porter's most important work was either written or begun during this period. Hacienda was published in 1934, and Flowering Judas and Other Stories came out in 1935, adding four more stories to those of the 1930 edition. The minor publication that led to Hacienda was entitled Katherine Anne Porter's French Song-Book. It included translations of French songs covering a six hundred year period, capitalizing on Porter's love of early music. Both works were published by Harrison of Paris, run by her friends Barbara Harrison and Monroe Wheeler. 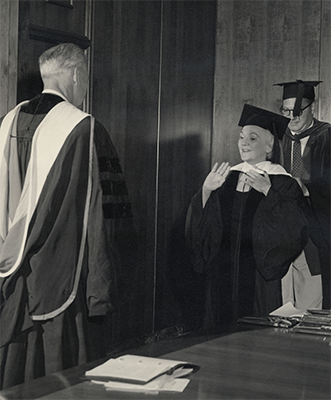 RETURN TO THE UNITED STATES

In October 1936, Porter and Pressly returned to the United States, with Pressly traveling to Washington to look for work and Porter settling for a time in Pennsylvania. This visit was highly productive, as she completed two of the "short novels" that appeared in Pale Horse, Pale Rider in 1939. After a three-month reunion with Porter in New York City, Pressly found a temporary position in South America; this led to their permanent separation and eventual divorce. In June 1937, Porter visited her family in Texas, afterward joining Allen Tate and Caroline Gordon at Olivet College in Michigan for a writers' conference. While staying in the Tates' home in Tennessee after the conference, she met Albert Erskine, her next husband, who was then a graduate student at Louisiana State University in Baton Rouge, Louisiana, and business manager for the Southern Review. In September 1937, Porter moved to New Orleans.

April 1938 brought both divorce from Pressly and another marriage. With Robert Penn Warren and his wife Cinina as witnesses, Porter married Albert Erskine. However, Porter and Erskine were separated within two years, and in June 1940 Porter went to live at Yaddo, the artists' colony in upstate New York. She had gained a reputation as one of the country's best writers following the publication of Pale Horse, Pale Rider (1939), which included the title work, "Noon Wine," and "Old Mortality."

Porter enjoyed living in upstate New York so much that in late 1940 she bought South Hill, a house near Saratoga Springs. It required a great deal of money and work to make it habitable, so Porter was not able to move in until the fall of 1942, shortly after her June 1942 divorce from Erskine. Life at South Hill during World War II proved too isolating. In the winter of 1943, she retreated to the Harbor Hill Inn in Cold Spring, New York. The next several years saw many relocations, including to the Georgetown neighborhood of Washington, D.C., while she was a Fellow of Regional Literature at the Library of Congress, and to Hollywood to try her hand at screenwriting. The Leaning Tower and Other Stories was published in 1944 in the midst of these moves and was followed eight years later by The Days Before, a book of critical essays.

Porter's success with a summer class at Stanford University in 1947 resulted in several long teaching stints at universities: Stanford University (1948-1949); University of Michigan (1953-1954); University of Liege (Fulbright Fellow, 1954); University of Virginia (1958); and Washington and Lee University (1959). Porter supplemented her income by giving readings and lectures and by appearing on radio and television. When not in residence at an academic institution, she lived for extended periods in three places: New York City (1949-1953); Southbury, Connecticut (1955-1958); and Washington, D.C. (1959-1969). The three years in Connecticut, funded largely with an advance from Seymour Lawrence, her new publisher, allowed her time to work on her novel. It was completed after she received a grant from the Ford Foundation in 1959.

CULMINATION OF HER CAREER

Porter's health gradually deteriorated after the publication of her Collected Stories, but she enjoyed the celebrity status she had attained. She accepted several honorary degrees, including one from the University of Maryland in 1966, and attended White House events during the Kennedy and Johnson administrations. In December 1966, Porter announced that she would donate her papers, personal library, and other personal effects to the University of Maryland, where the Katherine Anne Porter Room was dedicated in McKeldin Library on May 15, 1968. She moved to College Park in 1969, in part to be closer to the university and her papers.

Though in declining health, Porter continued to publish during the last decade of her life. A compilation, Collected Essays and Occasional Writings, was published in 1970. Porter travelled to Florida in 1972 to write an essay on the Apollo 17 lunar landing for Playboy, although the piece was never written. In 1974, she named Isabel Bayley, a woman she had met at a Kansas University seminar in 1948, as her literary trustee. The Never-Ending Wrong, a book about the Sacco-Vanzetti affair, came out in 1977. Early that same year, Porter suffered several debilitating strokes, from which she never recovered; her nephew Paul Porter was appointed as legal guardian in the fall. After the strokes, Porter received nursing care around the clock until her long life ended on September 18, 1980.

"So I feel this story is 'true' in the way that a work of fiction should be true, created out of all the scattered particles of life I was able to absorb and combine and shape into a living new being." 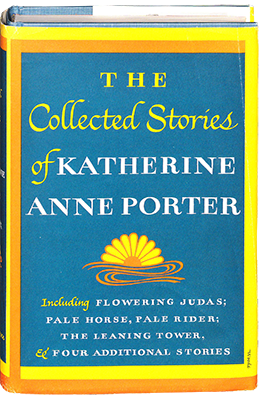