KATHERINE ANNE PORTER IN THE 1920s

Porter made three visits to Mexico in the 1920s, where she developed expertise on Mexican art and culture and became tangentially involved in Mexican politics. Her experiences there inspired and influenced her short stories published in Century, which earned her critical acclaim. While living in New York City in her thirties, she continued publishing short fiction, began a career of writing book reviews, and developed personal and professional relationships within the Greenwich Village literary scene. 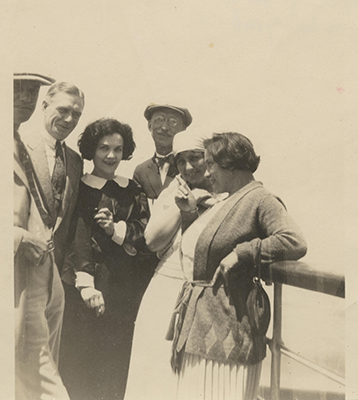 Porter begins publishing her work in national periodicals, both in the United States and in Mexico, regularly writing literary reviews, poetry, and other pieces. She begins publishing the short stories later recognized in her canon during this decade, beginning with “Maria Concepcion” in 1922. She ghostwrites My Chinese Marriage, published first serially and later as a monograph, and enters a contract to write a biography of Cotton Mather which is never completed.

In late 1920, Porter travels to Mexico following the Mexican Revolution and becomes politically involved, attending the inauguration of President Obregon and the third convention of Pan American Federation of Labor. Her visits of 1922 and 1923 were primarily devoted to Mexican art. Her Outline of Mexican Popular Arts and Crafts is published to coincide with an exhibition that opened in Los Angeles in November 1922. In 1927, she travels to Boston, MA, to protest the Sacco and Vanzetti executions.