KATHERINE ANNE PORTER IN THE 1970s

Porter continues publishing in national periodicals. The Collected Essays and Occasional Writings of Katherine Anne Porter and The Never-Ending Wrong are published. At the beginning of the decade, she enjoys being a public celebrity. Her health declines as the decade wears on, and,finally, she is incapacitated after a series of strokes. 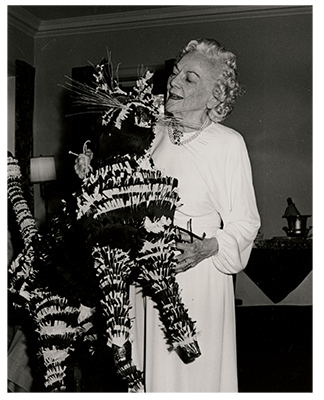 Porter continues publishing in national periodicals. The Collected Essays and Occasional Writings of Katherine Anne Porter is published in 1970. The Never-Ending Wrong, her memoir related to the Sacco and Vanzetti case, is published in 1977. She continues making public appearances and accepts a variety of awards.

Porter breaks her hip in 1970 and spends time in the hospital and nursing home to rehabilitate. Porter endures the deaths of several family members and friends in this decade: her older sister, Gay Porter Hollaway, in 1970, her younger sister, Mary Alice Porter Hillendahl, in 1973, her agent and friend, Cyrilly Abels, in 1975, and her friend Barbara Harrison Wescott, to whom Ship of Fools was dedicated, in 1977 . Porter suffers the first of several strokes in 1977. In September 1977, Porter is ruled incompetent, and her nephew Paul Porter, Jr., begins serving as guardian. She dies on September 18, 1980.

Porter returns the Emerson-Thoreau Medal to the American Academy of Arts and Sciences in protest of the academy’s failure to give the award to Ezra Pound in 1972. Her account of the 1927 executions of Sacco and Vanzetti is published to coincide with the fiftieth anniversary of the event.

Porter remains in her College Park residence for the duration of the decade. She moves into a Silver Spring, MD, nursing home in late March 1980 and resides there until her death.