Glenway Wescott (1901-1987), Monroe Wheeler (1899-1988), and George Platt Lynes (1907-1955) met Katherine Anne Porter in Paris in 1932. At the suggestion of their common friend Ford Madox Ford, Porter agreed to translate a group of old French songs for publication by the fine press Harrison of Paris founded by Wheeler and Barbara Harrison (later Wescott) in 1930. The last two publications of the press were Porter’s Katherine Anne Porter’s French Song-book (1933) and Hacienda (1934). Wescott, Wheeler, and Lynes remained among Porter’s dearest friends throughout their lives, sharing many visits and other social occasions as well as exchanging lively correspondences with her.

Wescott was the author of novels, poetry, short stories, and essays. Between 1924 and 1945, he published four novels and a collection of short stories. His Images of Truth: Remembrances and Criticism was published in 1962. From 1959 to 1962, Wescott served as president of the organization now known as the American Academy of Arts and Letters. He met Wheeler, his life partner in 1919 in Chicago; they settled in France in 1925, but returned to the U.S. in 1934, establishing residence in New York city. In 1927, Lynes had met Wescott and Wheeler, and they formed an intimate threesome that endured for nearly twenty years. Gay men, they lived with care and caution prompted by discriminatory homophobic attitudes in the United States and elsewhere during their lifetimes.

Wescott and Porter remained mutually supportive friends and colleagues until late in Porter’s life. Images of Truth contains a chapter on Porter, and Wescott was one of Porter’s friends who championed her induction into the American Academy of Arts and Letters and for her to receive the Gold Medal "for Eminence in Fiction" of the National Institute of Arts and Letters in 1967. In 1963, Wescott began working on the “Letters to a Circle of Friends 1933-1962: Thirty Years of Friendship,” an edition of letters documenting the friendships among Katherine Anne Porter, Wescott, Monroe Wheeler, Barbara Harrison Wescott, George Platt Lynes, and Russell Lynes, brother of George Platt Lynes and editor of Harper's Magazine. The friendship between Porter and Wescott foundered over delays in his work on it; the book was never completed.Wescott and Porter's correspondence constitutes one of the largest among the Porter holdings at the University of Maryland Libraries. Her letters to Wescott range over a wide variety of subjects both personal and professional.

Wheeler was a publisher and museum professional. He gained prestige from his work on Harrison of Paris. From 1930 until it ceased publishing in 1934, the press published thirteen limited editions of belle-lettres texts. In 1935, Wheeler began his association with New York’s Museum of Modern Art, then in its infancy. He eventually was appointed the museum’s Membership Director and subsequently as Director of Exhibitions and Publications.

Lynes was a successful photographer, whose subjects included literary and artistic figures, socialites, ballet dancers, and fashion models. His work was published in Vogue and Harper’s Bazaar, as well as other publications during his lifetime Lynes’s posthumous fame lies in his photographs of male nudes, acquired by the Kinsey Institute at Indiana University shortly before his early death. In May 1932, shortly after Porter met Lynes in Paris, he took the first of many photographs of Porter he was to make between 1932 and 1947. These include serious portraits, photographs of her at South Hill, and dramatically staged glamor shots. Most of those of the last category were taken in California in 1946 and 1947, when Lynes was the head of Vogue magazine's West Coast studio in Los Angeles. Porter and Lynes socialized frequently during this period when both were living in the Los Angeles area. Lynes and Porter carried on an extensive correspondence from 1932 to 1955, the year of Lynes’s death. 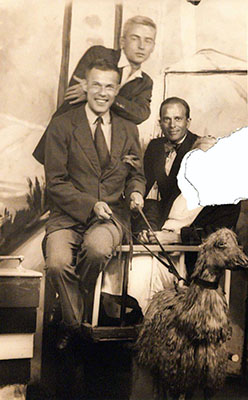