KATHERINE ANNE PORTER IN THE 1930s

Porter’s literary reputation grew in the 1930s as a result of the short fiction she published in periodicals and collected editions, including Flowering Judas and Other Stories and Pale Horse, Pale Rider. She was financially assisted by the Guggenheim awards she was granted in 1931 and 1938, and both of Porter’s husbands from this decade, Eugene Pressly and Albert Erskine, admired her work and encouraged her literary ambitions. Porter’s diverse residences in the 1930s, including Mexico, Germany, France, and Switzerland as well as five different U.S. states, exposed her to important historical events in the years leading up to World War II. 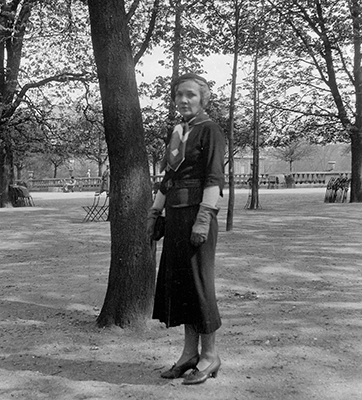 Porter continues publishing short stories and literary reviews in a variety of publications. She signs contracts with Harcourt, Brace in 1930. Flowering Judas is published as a limited edition collection of seven short stories in 1930, and Flowering Judas and Other Stories is re-issued with four stories added in 1935. Katherine Anne Porter’s French Song-Book is published in 1933, and Hacienda in 1934. Porter is awarded a Guggenheim Fellowship first in 1931 and again in 1938. The collected edition of her three short novels, Pale Horse, Pale Rider, is published in 1939. She also signs contracts for other book projects, including novels, that never materialize.

Porter and Eugene Pressly first meet in 1930, marry in 1933, separate in 1937, and formally divorce in 1938. Porter and Albert Erskine first meet in 1937, marry in 1938, and separate in 1940 though they will not officially divorce until 1942. During her residence in Baton Rouge, she develops a warm personal relationship with Cleanth Brooks and his wife, who remain lifelong friends.

Porter entertains and socializes with important historical and cultural figures at her home in Mexico during the spring and summer of 1931. These guests include Hart Crane, Sergei Eisenstein, Eugene Jolas, Carleton Beals, Moises Saenz, and Mexican artist David Alfaro Siquieros. Porter visits Eisenstein’s film set at Hacienda Telapayac immediately after Felix Balderas kills his sister there. Porter lives in Berlin, Germany during the rise of the Nazi Party, meeting Nazi leader Hermann Goering in November 1931. She lives in Paris in the years leading up to WWII, where she meets important cultural figures including Gertrude Stein. She attends the Olivet College Writer’s Conference in Michigan during the summers of 1937, 1938, and 1939. She attends the opening of the Museum of Modern Art in New York City in 1939.

Porter lives in four foreign countries and at least five U.S. states for extended periods during the 1930s. She lives in Mexico from April 1930- August 1931. She then travels to Berlin, Germany, where she lives for four months in 1931-1932. She resides predominantly in Paris, France, between 1932 and 1936 but also lives in Switzerland for six months in 1932. In early 1936, Porter makes an extended four-month visit to the U.S. after which she and Pressly repatriate in October 1936. She then she lives briefly in Doylestown, PA, and New York City, before settling in New Orleans in September 1937. From January to April 1938, she resides in Houston, TX, and thereafter moves to Baton Rouge, LA, where she resides from 1938 to 1940.