KATHERINE ANNE PORTER IN THE 1940s

In the 1940s, Porter continued publishing literary reviews, non-fiction pieces, and acclaimed short fiction, including The Leaning Tower and Other Stories. Her reputation as a public figure began to grow during her fifties, as well. She traveled the country for speaking engagements, took a residency at the Library of Congress, worked in the film industry, taught college courses, and interacted with other artists at Yaddo and the Olivet College Writer’s Conference. 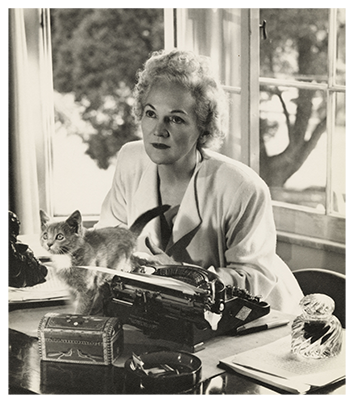 Porter continues to write widely distributed literary reviews and non-fiction pieces. She also publishes more short stories and excerpts from the uncompleted draft of what would eventually be incorporated into Ship of Fools. She arranges for the publication of a Modern Library edition of Flowering Judas in 1940 and publishes The Leaning Tower and Other Stories in 1944. She takes on a residency at the Library of Congress in 1944. In 1945-1946, she works for Metro Goldwyn Mayer and Paramount and teaches at Stanford University in Summer 1947 and 1948-1949. She also tours the country to give speeches, lectures, and readings, many of them at university campuses. In May 1949, the Women's College, University of North Carolina, awards her the Doctor of Literature, the first of many subsequent honorary degrees.

Porter officially divorces Albert Erskine in 1942. Her father, Harrison Boone Porter, also dies that year. She has a romantic relationship with Charles Shannon and her friendships with Monroe Wheeler, Glenway Wescott, and George Platt Lynes, whom she had met in Paris in the 1930s, are important throughout the decade and beyond. She becomes a mentor to her niece Ann and nephew Paul. She meets and befriends fellow writer Eudora Welty and Isabel Bayley, who became Porter’s literary trustee and published an edition of her letters following her death. Her long friendship with Josephine Herbst dissolves.

Porter again attends the Olivet College Writer’s Conference during the summers of 1940 and 1941. While participating in artist residencies at Yaddo, she interacts with other artists, composers, and writers, including Eudora Welty and Carson McCullers. During the time she lives in Santa Monica and Los Angeles, she socializes with celebrities including Charlie Chaplin.