Isabel Bayley (1911-1993) was an intimate friend of Porter who served as trustee of Porter’s literary estate from 1983 until 1993. Bayley and Porter met in 1948 when Porter taught at the Kansas University Seminar. The two began a correspondence immediately following. Porter adopted Bayley as one of her protegees, with whom she discussed her published work, her work in progress, as well as writing advice.

In an early letter to Bayley, Porter wrote of legacies: “It is interesting, to say the least: sometimes we have to wait for the generation after us to understand what we were talking about. . . . Just be very bold. Only, of course, you won’t even know that you are being bold. You can’t know that until much later.” (KAP to Isabel Bayley, October 1, 1948). Porter and Bayley maintained an extensive correspondence, with Porter sending Bayley many postcards, notes, recipes, and promises to visit Bayley at her home in Toronto. Bayley selected and edited the Letters of Katherine Anne Porter, published in 1990. 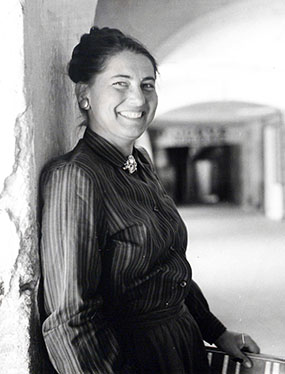