KATHERINE ANNE PORTER IN THE 1950s

As Porter’s literary reputation grew steadily in the 1950s, her public persona also flourished. She worked on the novel that became Ship of Fools, periodically publishing excerpts, and released a critically acclaimed book of essays, The Days Before. She frequently agreed to requests for public speaking engagements, accepted teaching and artist’s residencies at universities, and began participating in radio and television broadcasts. During this decade she was named a National Book Award finalist, awarded a Ford Foundation Grant, and conferred with several honorary degrees from various universities. 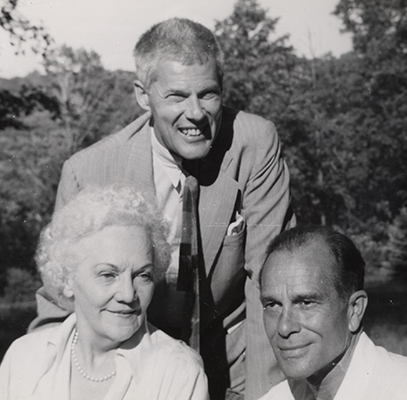 Porter continues to publish reviews, short stories, excerpts from Ship of Fools, and non-fiction pieces. She continues traveling to public speaking engagements and also participates in radio and television broadcasts. She works as an instructor at the University of Michigan between 1953 and 1954. She publishes The Days Before, a collection of essays, in 1952. It is named a finalist for the 1953 National Book Award in Non-Fiction. She publishes The Old Order, a collection of previously published short stories, in 1955. Porter ends her relationship with the publishing house Harcourt, Brace, signing a contract with Little, Brown in January 1956. During the academic year 1958-1958, she serves as writer in residence first at the University of Virginia and subsequently at Washington and Lee University. In 1959, she is awarded a two-year Ford Foundation Grant for $26,000 total.

Porter’s brother, Paul Porter, Sr., her publisher Donald Brace, and her close friend, photographer George Platt Lynes, die in 1955. She is hospitalized for various ailments between 1950 and 1955. She has an affair with writer William Goyen in 1951. Her friends Eleanor Clark and Robert Penn Warren marry in 1952; their relationship with Porter grows more intimate during the decade and remains important until her death.

In 1950 at a party in New York, Dylan Thomas lifts Porter to the ceiling in tribute. In 1953, she visits Ezra Pound at St. Elizabeth’s Hospital in Washington, D.C. At the Smith College commencement in 1958, Porter receives Litt. D. and meets John F. Kennedy. She and Flannery O’Connor become friends after meeting in 1958.

Until September 1953, Porter’s primary residence was New York City. She spent May to September 1952 in France, ostensibly to attend the Congress of Cultural Freedom. During the academic year 1953-1954, she is in Ann Arbor, MI. She accepts a Fulbright Grant in Liege, Belgium, for the 1954-1955 academic year but, because of ill health, returns to New York City in early 1955. From August 1955 to August 1958, she rents a house in Southbury, CT. She spends the Fall semester 1958 in Charlottesville, VA, and the Spring semester 1959 in Lexington, VA. Thereafter, she moves to Washington, D.C..