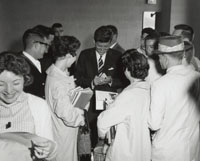 Kennedy, John F. — Senator John F. Kennedy visited campus twice before he became president of the United States. His first visit was on April 27, 1959, when he was the featured speaker at spring convocation. Speaking to a crowd of over 5,000, he encouraged the students to consider entering politics and to work to solve the problems of the nation. Kennedy also called for the repeal of the Student Loyalty Oath, required by the 1958 National Defense Education Act. A little more than a year later, Senator Kennedy was back at the University of Maryland on May 14, 1960, for a presidential campaign rally.

Kent Hall — Dormitory constructed in 1944; designed by Edwin Wilson Booth and named for Kent County, Maryland. The name "Kermit" is carved into the capstone of the parapet well along the entrance stairs on the left, which has led to speculation that Jim Henson lived in this dormitory; student directories show, however, that Henson never lived on campus during his undergraduate studies.

Kirwan, William E., Hall — The Mathematics Building was re-named William E. Kirwan Hall in 2015 in honor of former UMD President and USM Chancellor William E. "Brit" Kirwan.  Kirwan came to the University of Maryland in 1964 as an assistant professor of math and rose through the administrative ranks to serve as president of the university from 1989 to 1998 and as chancellor of the University Systems of Maryland from 2002 to 2015.  The building was constructed in 1952-1953 and was designed by the architectural firm Hall, Borden & Donaldson.

Kissing Tunnel — Historical name for the tunnel that runs beneath Regents Drive south of Memorial Chapel.  Campus couples used this spot over the years for romantic rendezvous.

Knight Hall, John S. and James L. — Dedicated in January 2010 as the new home of the Philip Merrill College of Journalism. Knight Hall is the first green building on campus and features a high percentage of regional and recylcled building materials, plumbing fixtures designed to reduce water usage, and an underground water collection system that is used to irrigate this portion of campus, as well as the provision of natural daylight to more than 85 percent of the building's interior spaces. Named to honor a gift of more than $21 million to the college from the John S. and James L. Knight Foundation, created by the brothers who founded the Knight Newspapers chain, later known as Knight-Ridder, Inc.

Knighthood — Distinguished University Professor of criminology and criminal justice Lawrence W. Sherman was knighted by King Carl XVI Gustav of Sweden for his services to the country and its Ministry of Justice in 2016.