National Association for the Advancement of Colored People (NAACP) — The first collegiate chapter for the state of Maryland was chartered at College Park on July 7, 1975.

National Academy of Engineering — Members of the National Academy of Engineering are recognized for their accomplishments in "business and academic management, technical positions, as university faculty, and as leaders in government or private engineering organizations."  As of 2020, thirty-four faculty members, administrators, and alumni have been named members of the NAE, and former UMD President C.D. (Dan) Mote served as president of the Academy from 2013 to 2019.

National Basketball Association (NBA) Coaches — Two former Terrapin players have served as head coaches in the NBA: Gene Shue, for the Baltimore and Washington Bullets, Philadelphia 76ers, San Diego and Los Angeles Clippers, and John Lucas, for the San Antonio Spurs, Philadelphia 76ers, and Cleveland Cavaliers.  Jim O'Brien, who received his M.B.A. from Maryland in 1981, served as head coach for the Boston Celtics, Philadelphia 76'ers, and Indiana Pacers.  Former Terp Kirsti Toliver, who helped lead the women's basketball team to a national championship in 2006, became the fourth woman ever named to an NBA coaching staff in 2018, when the Washington Wizards hired her as an assistant coach for player development; Toliver was the first active WNBA player to join an NBA staff.

National Basketball Association (NBA) Players — As of 2019, more than 40 Terps have gone on to play in the NBA.  Find a list of all the Terps who have played professionally in the digital men's basketball media guide available on umterps.com.

National Football Foundation College Football Hall of Fame — Nine Terrapins have been inducted into the Hall of Fame for college football players and coaches: Bob Ward (in 1980), Jack Scarbath (in 1983), Coach Jim Tatum (in 1984), Coach Jerry Claiborne (in 1999), and Stan Jones (in 2000).

National Football League (NFL) Players — As of 2019, more than 230 Terps have gone on to play in the NFL.  Find a list of all the Terps who have played professionally in the digital football media guide available on umterps.com.

National Medal of Science — The National Medal of Science was created by law in 1959 and is administered for the White House by the National Science Foundation.  The Medal recognized individuals who have made outstanding contributions to science and engineering.  Four Terps have received this prestigious honor: Helmut Landsberg, a faculty member in the Institute for Fluid Dynamics and Applied Mathematics, in 1983 in recognition of his pioneering contributions to the field of climatology; Rita Colwell, a faculty member in the Center for Bioinformatics and Computational Biology, in 2006 for her research that has led to a greater understanding of the ecology, physiology, and evolution of marine microbes, most notably Vibrio cholerae, the causative agent of pandemic cholera; Sylvester James Gates, professor physics, in 2013 for "contributions to the mathematics of supersymmetry in particle, field, and string theories and extraordinary efforts to engage the public on the beauty and wonder of fundamental physics;" and alumnus and renowned chemist Tobin Marks in 2005 for his research into the properties of new substances.

NATO, U.S. Ambassador to — University of Maryland faculty member Ivo Daalder was sworn in as the U.S. Ambassador to NATO on May 15, 2009. Prior to his selection as the NATO ambassador, Dr. Daalder taught in the UMD School of Public Policy and served as a member of President Bill Clinton's National Security Council staff from 1995 to 1996.

Navy Vessel — The USS Booth is the only known U.S. Navy vessel named for a University of Maryland alumnus. The Booth, a Destroyer Escort, honors Ensign Robert Sinclair Booth (Class of 1936), the first Terp killed in World War II. Ensign Booth was aboard the USS Arizona when it was attacked and sunk at Pearl Harbor, December 7, 1941.

Neutral Buoyancy Tank — Facility maintained by the A. James Clark School of Engineering to conduct product testing and simulate weightless conditions in outer space. It is the only such facility on a university campus in the United States. 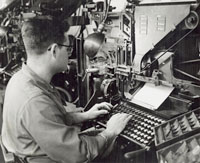 Newspaper — Students began publishing a major campus newspaper in 1910.  First issue appeared on January 1, 1910, and the first editor was Millard Tydings, who later represented the state of Maryland in the U.S. Senate from 1927 to 1951.  The paper was originally called the The Triangle, and it changed names several times until it became The Diamondback on June 9, 1921. The Diamondback is also part of an athletic tradition at the university. At home basketball games, students pretend to read the paper as the visiting team is introduced, then they ball up the papers and toss them down into the first few rows of seats. Current issues of the paper and its digital archive are available at Diamondback Online.  Historical/archival issues of the paper are available via the UMD Student Newspapers database.

Nixon, President Richard M. — Students David Simpson and Charles Bloucher met with President Nixon on May 12, 1971, in the White House.  Nixon wished to congratulate them for their actions in preventing Vietnam War protestors from hanging the American flag upside down at a demonstration on campus.  Men's basketball player Tom McMillen also had a chance to meet President Nixon three months earlier at a White House reception for the President's Council on Physical Fitness and Sports Advisory Conference, an event captured in a front-page photo of the February 20, 1971, Washington Post.

Nobel Prize Winners — Herbert A. Hauptman, who earned his Ph.D. from Maryland in 1955, was a co-recipient in chemistry in 1985; Juan Ramón Jiménez, a professor of modern languages from 1948 to 1951, received the 1956 prize in literature; Raymond Davis, Jr., who received his bachelor's and master's degrees in chemistry from the university in 1937 and 1939 respectively, was a co-recipient of the prize for physics in 2002; William Phillips—who won the Nobel Prize in 1997 for his work in atomic physics—is the first Nobel Laureate to be appointed to a full faculty position in the history of the University of Maryland. Thomas Schelling, emeritus distinguished university professor in the Department of Economics and the School of Public Policy, won the Nobel Prize in economics in 2005 for his research in game theory.  The following year, adjunct professor John C. Mather won the Nobel Prize in physics for his measurements of cosmic background radiation immediately after the birth of the Universe; he shared the award with George F. Smoot of the University of California, Berkeley.

Nyumburu Cultural Center — Constructed in 1996 next to the Stamp Student Union; name means "Freedom House" in Swahili. Nyumburu serves as the campus' center for black social, cultural, and intellectual interaction. The center sponsors lectures and forums, art exhibits, and instruction in dance, music, and creative writing; hosts guest artists and scholars; and publishes the Black Explosion newspaper.  Back issues of Black Explosion may be accessed through the UMD Student Newspapers database.  Current issues are available via The Black Explosion website.