Testudo is the centerpiece of our campus, and the act of rubbing his nose for good luck is our most-enduring tradition. The original statue, which now stands in front of McKeldin Library, was the gift of the Class of 1933 whose members felt it was high time that the University of Maryland had an official mascot. Even though the United States was in the midst of the Great Depression, the 268 members of the class managed to gather enough funds for the sculpture by holding their prom on campus, rather than in a fancy hotel in downtown Washington, contributing their profits from the 1932 Reveille yearbook, cancelling the publication of the Old Line magazine, and gathering other donations. Student Government Association president Ralph Williams then took a live terrapin north to Providence, Rhode Island, by train to be captured in bronze by sculptor Aristide Cianfarani and the Gorham Manufacturing Co., which cast the statue. 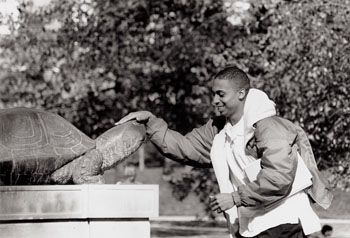 After dedication ceremonies on Class Day, June 2, 1933, Testudo assumed watch over the campus from a pedestal in front of Ritchie Coliseum next to Route 1. Although he was not a light-weight at 300 pounds, he was subject to capture by students from rival schools, usually before major athletic contests. One of the most memorable such incidents occurred before the Maryland vs. Johns Hopkins national lacrosse championship game in 1947. A group of Hopkins students kidnapped Testudo and carted him off to Baltimore, where they buried him for safekeeping. They then prepared their Alumni Memorial Residence for battle by stringing barbed wire and laying in a supply of fire hoses and soap chips. When the contingent of approximately 250 University of Maryland rescuers arrived at 2 a.m. on the morning of the game, they were soaked by the fire hoses, and those Terps that succeeded in entering the dormitory slid all over the soap-slicked floors. Over 200 Baltimore policemen fought for almost two hours to control the chaos, in the process arresting eleven students, three from Hopkins and eight from Maryland, for disorderly conduct. Hopkins dean G. Wilson Shaffer finally put an end to the battle by ordering the excavation and return of Testudo before the opening face-off of the big game. The Hopkins students complied, but painted a large, blue "H" on him before his trip home. Some of the Maryland students later shaved the heads of the Hopkins offenders as punishment.

To avoid a repeat of such incidents, campus officials later filled Testudo with cement and steel rods, bringing his total weight to approximately 1,000 pounds, and permanently attached him to his base. They also decided to move Testudo to a more secure location, and, after several shifts, positioned him in front of McKeldin Library in 1965, where he remains to this day.

The tradition of rubbing his nose for good luck has given Testudo quite a sheen since 1933! More recently, beginning in the early 1990s, students have begun to leave Testudo offerings of any imaginable kind--food, cigarettes, soda, beer, poems, computer discs, candy, flowers, coins--at final exam time.

Testudo is truly the traditional heart of our campus! So strong is his power that five exact copies of the original statue have been installed on campus: outside the Xfinity Center, inside the Stamp Student Union, one on either side of the Gossett Football Team House, and outside the Samuel Riggs IV Alumni Center--to spread his magic.  An additional Testudo, which is not an exact replica of the original, was installed in the courtyard of Van Munching Hall in April 2018.

Thank you to the Class of 1933 for creating such a powerful symbol of the University of Maryland spirit! And long live Testudo!